A special power that uses the mind to move objects without exerting physical forces on it.

Psychokinesis[1] (サイコキネシス[2], Saikokineshisu?), also called PK, is a move used by Silver the Hedgehog that first appeared in Sonic the Hedgehog (2006). It is a technique that lets Silver move (-kinesis) matter with the mind (psycho-) remotely, and is a signature move amongst his psychokinetic powers.

Psychokinesis is Silver the Hedgehog's most frequently performed move, which he uses to manipulate objects. When using it, Silver focuses his psychokinetic powers on the environment around him, allowing him to pick up surrounding objects and move them around at will without exerting physical force on them. When in use, Silver's psychic powers surrounds the targeted object with a cyan aura.

In Sonic the Hedgehog (2006), Psychokinesis is one of Silver's moves in gameplay and can be used for a variety of purposes. In this game, Silver is surrounded in a cyan aura himself when using Psychokinesis. To use this move in gameplay, the player has to hold down

Psychokinesis' primary function is to pick surrounding objects to use as projectiles against enemies. When using Psychokinesis near potential objects, the player will automatically pick them up, causing them to levitate around Silver. Psychokinesis will then remain active until Silver has thrown away the objects with either Psycho Smash, Hold Smash or Grab All, or simply drops them, which can be done by pressing

again. Additionally, if an enemy is paralyzed, Silver can pick them up with Psychokinesis as well. With each object picked up by Psychokinesis, however, Silver's Action Gauge decreases slightly; if it runs out or does not have enough energy, Psychokinesis cannot be used to pick up more objects.

Another use for Psychokinesis is to grab enemies' projectiles. If large projectiles, like fireballs or missiles, are fired by enemies, the player can use Psychokinesis to grab them in midair and then throw them back at enemies with Psycho Smash. Like regular objects, though, each grabbed projectile decreases Silver's Action Gauge, and if it runs out or does not have enough energy, Psychokinesis cannot grab more projectiles. In both cases, Silver is vulnerable to projectiles he hurls. So, if during gameplay the items he picks get behind him when the player flings them, Silver will get a damage from the impact.

By standing on top of a movable object (such as Crates or cars) and using Psychokinesis on it, it will cause Silver and the object in question to rise into the air until Silver reaches a peak of altitude. While standing on the object, Silver can fly through the air and reach higher areas, and the player can use the left control stick to direct the flight. Using Psychokinesis this way steadily drains the Action Gauge, however, and when it reaches 15-20%, the player can no longer move the object.

Psychokinesis can also be used to create paths in the game. By using Psychokinesis on a PK Mark, Silver will be able to reach a new area, either by a path being formed from surrounding objects that move permanently into place, by pulling apart cages blocking the path or by bending beams that will send Silver flying into the area. Using Psychokinesis this way does not drain Silver's Action Gauge.

In the boss battles against Silver, Silver can exclusively use Psychokinesis to grab the player's character when they get too close at the wrong time and throw them away, causing damage. This is not possible in normal gameplay, but can be done in the game's multiplayer mode.

In the console/PC version of Sonic Generations, Psychokinesis appears during the boss battle against Silver. In this game, Silver utilizes it to pick up surrounding objects to attack Sonic, using techniques such as Meteor Smash. Here, Silver is not surrounded by a cyan aura when using Psychokinesis.

Levitate is a midair version of Psychokinesis used by Silver. By basically performing Psychokinesis on himself, Silver is able to levitate and fly through the air for a short time.

The Shield of Light is an enhanced version of Psychokinesis used by Silver in his Super State. It is only used during the boss battle against Solaris. With this move, Super Silver exerts a field that lets him grab Solaris' solid projectiles and energy balls, before throwing them back at him.

In the Sonic the Hedgehog comic series and its spin-offs published by Archie Comics, the ability is known as "Telekinesis", before the Super Genesis Wave. Silver usually extends his arm in order to lift, throw, hold and move objects, people, and himself easily. It is especially useful in deflecting any projectiles thrown at him. He tends to use this ability frequently, at times using it to throw entire buildings and disable people in a super state. In this version, a cyan aura appears when Silver uses his psychic powers like in Sonic the Hedgehog (2006).

After the Super Genesis Wave, Silver retains the same powers as before but can also manipulate energy with it, such as when he set out to close the Genesis Portals. Silver is highly proficient in the usage of his psychokinesis, being capable of briefly restraining beings like the Ifrit and deflecting attacks.

In the Sonic the Hedgehog comic series published by IDW, Silver once again has psychokinetic abilities. Whenever using his psychokinesis, Silver and the targets he affects get surrounded in a cyan aura. With it, Silver can telekinetically lift, throw, hold and move objects (and people) easily, and even immobilize enemies.[3][4] He can also form constructs out of psychokinetic energies, like lassos and force-fields for protection and encasing targets.[4] Silver can also use his psychokinesis on himself, thereby allowing him to hover and fly.[3]

While his psychokinetic powers can hold a vast amount of objects, Silver does have a limit to how many objects he can hold in a psychokinetic grip.[5] He also has trouble telekinetically grabbing multiple targets at once over greater distances with his psychokinesis, and must concentrate greatly in order to pull off such a feat.[6] He similarly cannot telekinetically grab targets that move too fast for him to focus on.[4] 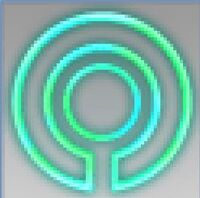 The PK mark for Psychokinesis.