Spins the Piko Piko Hammer as a propeller.

The Propeller Hammer (プロペラハンマー, Puroperahanmā?) is a technique used by Amy Rose. It first appeared in Sonic Heroes. When performing this move, Amy spins her Piko Piko Hammer to gain temporary flight.

When using the Propeller Hammer, Amy pulls out her Piko Piko Hammer and begins swirling around with it in a manner similar to a propeller.[1] This creates an updraft that allows her to momentarily sustain flight through the air for a short time.

The Propeller Hammer first appeared in Sonic Heroes, where it is a Speed Formation maneuver used by Amy on Team Rose. In this game, it allows the player to move slowly through mid-air, making it possible to cross gaps and bottomless pits, though it can only be sustained for a few seconds before Amy will drop down. When using the Propeller Hammer, Amy leaves a trail of pink hearts.

To perform the Propeller Hammer in gameplay, Team Rose must be in Speed Formation. The player must then hold down

The Propeller Hammer made a cameo appearance in the console/PC version of Sonic Generations. In this game, it appeared in the Amy: Topsy Turvy Challenge Act where Amy uses it to race against Classic Sonic to the Goal Plate. Here, it appears that Amy has perfected this move as she can use it to fly through the air more freely and change her height at will. When using it in this game, Amy resembles a small pink tornado. If the player contacts with her while utilizing the move, she will be knocked down and temporary immobilized. 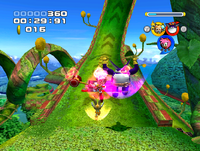