The correct title of this article is Project: Shadow. It appears incorrectly here because of technical restrictions.

"Project: Shadow" is the thirty-third episode of the anime series, Sonic X, as well as the first episode of the Shadow Saga. It first aired on 16 November 2003 and 30 October 2004 in Japan and the United States respectively.

The episode starts with Sonic running through the ruins of Station Square following Perfect Chaos' destruction of the city when he suddenly hears crying sounds from the debris. As the residents of Station Square repair their city, Guardian Units of the Nations begins mass production of its own Hunter series robots to counter Dr. Eggman. Using a spy robot, Eggman examines their progress and notes with annoyance that "all they did was copy (his) designs." As he hacks GUN's computers for more information—displaying pictures of several GUN robots—he finds a database entry for his grandfather, Gerald Robotnik. Eggman concludes that he was born on Earth, rather than in Sonic's world, and that the two are parallel dimensions. As Eggman continues his search, he uncovers Gerald's diary that reveals he has finished the final product of his "Ultimate Life Form" project, named "Shadow". Transferring it from GUN's computers alerts them to his activities, and the President assigns Rouge and Topaz to monitor him.

Rouge and Topaz secure a Chaos Emerald to use as bait to gain Eggman's trust—as well as the Master Emerald itself, which Rouge is unwilling to leave behind although Knuckles tried to stop her. Meanwhile, Eggman fights his way into GUN's base on Prison Island. He reaches the capsule containing Shadow and releases him, astonished to see the silhouette of a hedgehog in the cryogenic vapors. 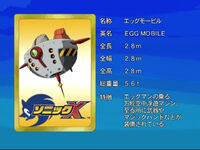 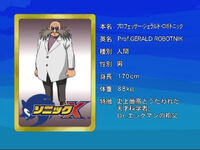