The logo for Project Shadow, from Sonic Adventure 2.

50 years before the events of Shadow the Hedgehog

President of the United Federation

Project Shadow (プロジェクトシャドウ, Purojekuto Shadō?), also known as Project Shadows,[1] is an event that appears in the Sonic the Hedgehog series. It was a medical research program conducted by the United Federation over fifty years before the events of the Black Arms' invasion of earth for researching immortality.

The results of Project Shadow produced two creatures endowed with immortality: the prototype named the Biolizard, and the final product, Shadow the Hedgehog. However, the project was shut down by the military when it was deemed too dangerous, which indirectly resulted in the deaths of Gerald and Maria Robotnik. The project's legacy forms the basis for the storylines of both Sonic Adventure 2 and Shadow the Hedgehog.

Project Shadow was conceived over fifty years before the Black Arms' arrival on earth by the President of the United Federation at that time (thirteen presidents before the current one) under the premise of achieving "mankind's ultimate eternal dream: researching for immortality."[2] However, the true intent for the project was to use the results to develop weapons of mass destruction.[3]

The President personally requested Professor Gerald Robotnik, the most brilliant mind of his time, for assistance. Initially, Gerald refused, believing that they were crossing the limits that man should not tamper with and that they would use his research for war. But then he realized that he could co-opt the program in order to find a cure for Neuro-Immune Deficiency Syndrome, an incurable and fatal disease afflicting his beloved granddaughter, Maria. As such, Gerald eventually accepted the request and agreed to lead the project on the Space Colony ARK, an orbiting facility isolated from earth. There, all advanced research on the project was strictly confidential[2]

There are two reasons why the name "Shadow" in particular was coined for the project: one came from the irony that a shadow could not be created, referencing the belief that immortality was not possible[2] and working as a metaphor of "unreal things";[4] while the other one came from Maria herself, who said that it sounded "cute" and that shadows could "teach people the way to the light".[4] However, Gerald himself thought that the name sounded "villain-like".[4]

At first, everyone thought that Project Shadow was far too reckless and far-fetched to have ever been fabricated by Gerald's gifted mind. In the beginning, Gerald and his colleges researched the Chaos Emeralds, resulting in the creation of the Chaos Drives, during tests to apply Chaos Emerald energy to living beings. When those tests proved successful, the project moved onto creating the prototype of an immortal being dubbed "The Ultimate Lifeform."[2]

During development, Gerald needed help with his work and as such made contact with Black Doom, the alien leader of the Black Arms race, during the fifty-year return of the Black Comet. In exchange for the seven Chaos Emeralds being delivered to him in fifty years, Black Doom assisted Gerald with his research, going so far as to provide genetic material for the project in the form of his own blood.[5][6]

The project eventually produced the "Prototype of the Ultimate Lifeform", dubbed the Biolizard, which was modeled after a lizard.[2] At 12:30am on 27 January, the Biolizard was brought to life, its external engine and Chaos Control-inducing organ working normally.[1] The Biolizard demonstrated many of the desired traits as it grew, including regeneration and self-reproduction, though it required a Life Support System fueled by Chaos Drives to remain viable. While the researchers were overjoyed over the Biolizard's evolution, their joy proved brief.[2] In addition to having an unexpected and exponentially fast growth rate, the Biolizard was like a primitive animal. It also lacked the strength to walk, although its tail and neck were strong. As such, it was kept it under observation.[7] Eventually, the Biolizard evolved to become so unruly that the researchers had trouble controlling it.[2]

Over time, the development of the ultimate lifeform continued and shifted. Using the DNA of Black Doom,[6] Gerald created a new version of the prototype, but using a more desirable physique for the creature.[2]

Because of the Biolizard's violent nature, doubts about Project Shadow began internally from the researchers, who began questioning the duration, significance and safety of the research. Eventually, private information about the project leaked to GUN, presumably by the internal staff who had witnessed the prototype going out of control.[2] Since the nature of the project also made the government uneasy following Gerald's contact with the Black Arms, they considered freezing Project Shadow.[8][9] In an attempt to keep Project Shadow going, Gerald offered the Gizoid, an ancient robotic superweapon he had discovered, to the government as a bribe. Unfortunately, the bribe did not work and the Gizoid went on a rampage on the ARK.[9][10][11]

Project Shadow was eventually completed after years of research when Gerald produced a more advanced version of the prototype of the Ultimate Lifeform with Black Doom's DNA: Shadow the Hedgehog.[6][12] Gerald imparted Shadow with a heart and personality similar to that of Maria in the hopes that he would not become a weapon.[3] In addition to possessing immortality, Shadow did not need machinery to live, could complete tasks alone, and possessed both high intelligence and his own identity. Shadow himself became close to those living on the ARK, especially Maria who shared his curiosity of earth, though he would occasionally ponder about what his true purpose was.

Find them before they escape!

Fearful of how dangerous and costly Gerald's experiments were, the military plotted to take possession of Shadow.[12][13] The top ranking officials of GUN, who saw the research institution's uniqueness as hostile, arrived at the decision to set a plan to close the ARK itself. To this, they formulated the "ARK Seal Destruction Operation" (ＡＲＫ封滅作戦, ARK fūmetsu sakusen?) that took advantage of its current situation. Making up a public story that a biohazard had occurred within the ARK research institution for ostensible purposes, all of the colony's residents were to be evacuated while the research facilities were sealed. The plan's true purpose however, was to close down the ARK's research facility, destroy everyone and everything (except Gerald) related to Project Shadow, and detain Gerald as the cause of the accident.[2][14]

Sometime after the completion of Project Shadow, the ARK was violently invaded by GUN Soldiers, evacuating civilians and killing researchers. During the attack, Gerald put his finishing touches on Shadow. As GUN's Special Forces rushed the ARK's laboratory, Gerald had Maria escape with Shadow.[2] In the ensuing chase, Maria and Shadow got to the escape pods, but Maria was shot by a soldier when helping Shadow escape. Mortally wounded, Maria ejected Shadow to earth in an escape pod with her last strength. Meanwhile, Gerald made sure the escape pod was rejected safely toward earth.[2]

Despite the complications, the military's plan went along. Within a week, the residents of the ARK had all been moved back to earth, the ARK's research facilities had been frozen, and the people involved in Project Shadow, except for Gerald, were announced as victims of the accident told to the public. The plan was completed when the Biolizard was sealed away onboard the ARK after finding it in the deepest part of the space station.[2] The ARK was then sealed off, probably to prevent the Biolizard from falling into the wrong hands.[14]

With the operations about Project Shadow ceased on the ARK, Gerald was taken to Prison Island to continue his research under military control.[12] The military later retrieved Shadow and brought him to Prison Island for Gerald to continue his work,[12] but when Gerald learned that Maria had been killed, he went mad with grief. While it was thought that he was continuing his research with Shadow,[12] Gerald secretly created a program that would cause the ARK to fall to earth and destroy it as his revenge at humanity, going as far as to brainwash Shadow to make him carry out his revenge when he awoke.[15] When the military began to fear how Gerald might retaliate, however, they incarcerated him on Prison Island. Knowing only the danger of Project Shadow, the military sealed the island and abandoned the professor's research.[12] Gerald was subsequently executed while Shadow was placed in suspended animation on Prison Island.

In Sonic Adventure 2, over fifty years after the shutdown, Dr. Eggman learned of the existence of Project Shadow after discovering the diary of his grandfather, Professor Gerald.[12] Reading of a "top-secret military weapon" that was shut down by the military because they feared it, Eggman retrieved the weapon, Shadow the Hedgehog, from Prison Island to use him for world domination. This set in motion a chain of events that initiated Gerald's doomsday program, but Shadow overcame Gerald's brainwashing and saved the earth, as per Maria's last wish.

In Shadow the Hedgehog, it is revealed that Black Doom had his own, non-humanitarian agenda in contributing to Project Shadow: his goal was to produce an agent who would gather the Chaos Emeralds for him fifty years later so he could invade earth and enslave the human population at this planned time. Ironically, Black Doom was the only one who got what he wanted from Project Shadow, only for it to backfire on him spectacularly: while Shadow did collect the Chaos Emeralds as Black Doom wanted, Shadow learned the truth of his past and instead of using them for Black Doom, he used them to become Super Shadow to defeat Black Doom and destroy the Black Comet using the Eclipse Cannon, thus thwarting his invasion.

In the Sonic X anime series, Project Shadow was a medical research program directed by Gerald Robotnik for the purpose of creating the ultimate creature. This led to the creation of the Bio Lizard and Shadow the Hedgehog. However, though the project was a success, the military shut it down, fearing it was too dangerous.

In the Sonic the Hedgehog comic series and its spin-offs published by Archie Comics, Project Shadow was carried out by Professor Gerald Robotnik onboard the Space Colony ARK for the purpose of creating an immortal lifeform. It was also part of Gerald's own research into a cure for Neuro-Immuno Deficiency Syndrome, which his granddaughter, Maria Robotnik, had contracted. The project gave birth to the Biolizard and Shadow the Hedgehog. Upon learning of Shadow's birth however, G.U.N. decided to use him as a weapon. They subsequently captured Gerald and Shadow, and Gerald was forced to continue on the project under military control. However, the project was discontinued when G.U.N. began to fear Gerald's retaliation.

In the Sonic the Hedgehog film series produced by Paramount Pictures and its spin-offs, Project Shadow was a secret government project sealed over fifty years before the events of the series. It led to the creation of Shadow the Hedgehog.

In 2013, Insert Coin made a Project Shadow-themed hoodie. In 2020, Jakks Pacific released a sports-themed line of bendable action figures, including a Shadow figure with a soccer ball accessory with the Project Shadow logo on it. 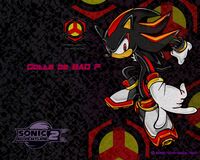