How dare they call this culinary concoction food? Look here, do you see this sorry excuse for a sandwich? The bread should be no less than 3/4 of an inch thick. Upon it, one tablespoon of mayonnaise and a pinch of black pepper. The contents, FRESH cucumber, sliced THINLY if you please! Am I quite right, Tails?

Professor Pickle (ピックル教授, Pikkuru Kyōju?) is a supporting character in Sonic Unleashed. He is a human academic based at Spagonia University and a world-renowned scholar and expert in ancient literature.[1][2]

When Dr. Eggman sought the power of Dark Gaia, Pickle was kidnapped and had his research stolen by Eggman due to his knowledge on the creature, but was freed by Sonic the Hedgehog, Tails and Chip. Pickle then assisted Sonic and his friends in their mission to put the earth back together after it had been shattered by Dark Gaia by guiding them to the Gaia Temples.

Professor Pickle is a middle-aged man with fair skin. He has gray hair and very large eyebrows that cover his eyes. He wears a coat with brown buttons, pants and brown shoes. Below is a white shirt with a red bow.

Not much is known about Pickle's early life. Over eighty years prior to Sonic Unleashed, Pickle met Otto and became a life-long friend of his. At some point in his life, he was inspired by Otto to embark on a research career.[3] Eventually, Pickle became a professor in ancient literature at Spagonia University, where he would teach students in a number of classes. He also became an expert scientist on the Gaia Manuscripts and made a number of researches finding on them. He later on met Tails and came to know him quite well.

Shortly before the events of Sonic Unleashed, Pickle was kidnapped from his lab by Dr. Eggman, who sought his research and the Gaia Manuscripts to awaken Dark Gaia and use the beast's power to complete his Eggmanland project. Pickle was then carried off with his lab data by Eggman and taken to Mazuri where he was imprisoned in a holding cell in Eggman's local base.

Some time after the Earth was split apart by Dark Gaia after Eggman awoke it, Tails, Sonic the Werehog and Chip came to rescue Pickle. Though Pickle was worried and annoyed about the bad food he was being fed with during his captivity and wanted to complain to the cook, he was nevertheless freed and conviced to leave the base. Before leaving, however, Pickle got Sonic and Tails to retrieve the Gaia Manuscripts from a nearby vault, before accepting some chocolate from Chip as they left. After returning to his lab, Pickle explained to Sonic and Tails about how Dark Gaia was responsible for breaking the planet and told Sonic that he could bring the planet back together and seal away Dark Gaia by restoring the currently-drained Chaos Emeralds inside the seven Gaia Temples scattered across the globe.

From there, Professor Pickle remained in his lab to research the Gaia Manuscripts, providing Sonic, Tails and Chip with the Gaia Temples' locations in Mazuri, Spagonia, Chun-nan and Holoska, and gave them info on the planet's status. During his reseach, Pickle learned of Dark Gaia's Minions' ability to possess people, so to counter this, Pickle designed the "Uncanny Camera" to exorcise possessed people and gave it to Tails and Sonic. Shortly after, Pickle saw Sonic perform his first exorcism from a distance. After Sonic left, Pickle stepped forth and complemented his work, where he met Amy and told her everything he knew about Sonic upon her eager request.

Afterwards, Pickle continued researching the Gaia Manuscripts with aid from Amy. When Sonic and Chip returned to Pickle after restoring the fourth continent, Pickle had pinpointed the next Gaia Temple in Shamar and decided to join them there to make his analysis more efficient. Moving his lab to his research facility in Shamar, Pickle met up with Sonic and his friends where he continued researching the Gaia Manuscripts and located the Gaia Temples in Adabat and Eggmanland.

When Sonic and Chip were restoring the last continent, Pickle reported to Tails over his Miles Electric about the restoration process until he was interrupted by an attack on Tails' Tornado-1. When Perfect Dark Gaia then began casting the world into darkness, Pickle and Amy got outside to see the darkning sky, where Pickle gave into despair as the world seemed doomed despite Amy's assuring him Sonic would save them. However, Super Sonic and the Gaia Colossus defeated and sealed Perfect Dark Gaia away, which Pickle praised as a miracle as the world returned to normal. As Pickle then admitted to Amy that she was right, he reflected on how Light Gaia and Dark Gaia were a part of the planet's desire for balance when he was dragged with Amy to prepare for Sonic's coming-home party.

Professor Pickle is wise, calm and well mannered, but is not without his own eccentricities as his mind tends to beat at his unique pace.[1] As such, he is easy-going and aloof in even those most dire of situations, like when he was more incensed about the poor sandwiches Dr. Eggman made than about being kidnapped and trapped inside Eggman's base.

Pickle's favorite food is cucumber sandwiches and will happily share his knowledge over them. He is somewhat of a perfectionist about such sandwiches, as he has a very firm and precise opinion on how they should be and will fuss over the smallest of details. He has also acquired a variety of interests from his studies across the globe.[1]

Pickle is an accomplished researcher in his field. He is an expert in ancient literature and is the only person so far who knows how to read the incredible ancient texts in the Gaia Manuscripts. He is also a capable teacher given that he teaches students at Spagonia University which is a highly prestige university by comparison.

Professor Pickle appears in the Archie Comics' Sonic the Hedgehog comic books and spin-offs where his full name is Dillon Pickle. In this media, he is a human academic from Spagonia stationed at Spagonia University and a renowned archaeologist and historical anthropologist.

"I'm half-starved after being fed nothing but those terrible sandwiches."
—Pickle when leaving Eggman's base in Mazuri.

"My, My! Don't mind if I do!"
—Pickle when Chip offers him chocolate.

"It's just as the Gaia manuscripts foretold!""
—Pickle when seeing predicted events in the Gaia Manuscripts happening.

"Oh? Oh! I see, how rude of me!"
—Pickle when he finds out that he was being rescued from Eggman's base.

"We cannot live without the night. We all must sleep. We all must rest. Darkness is a part of our world, just the same as light. It may be that the darkness has not been destroyed, but merely laid to rest. It grows strong over the eons, rises up, then is put to slumber by the light. Perhaps that is the true balance of Dark and Light Gaia. That balance may be the very will of the planet itself."
—Pickle reflecting on the meaning of Light Gaia and Dark Gaia. 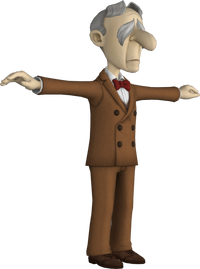