Shadow on Prison Island, from Shadow the Hedgehog.

I know this place... It feels like I've been here before...

Prison Island is a Stage in Shadow the Hedgehog. It is located on the G.U.N. base, Prison Island, which previously appeared in Sonic Adventure 2. Prison Island is one of the third Stages, being reached by completing the Hero mission of Digital Circuit, the Normal mission of Glyphic Canyon or the Dark mission of Lethal Highway.

Prison Island in this game is what remains of the island that was partially destroyed in Sonic Adventure 2. Dr. Eggman's bomb caused toxic waste to flood the rivers in the area, and plant life has grown on many of the structures.

Shadow the Hedgehog uses Chaos Control to teleport to the remains of Prison Island in search of another Chaos Emerald. He is then treated to some flashbacks of his cell on the island, raising yet more questions about his past. He very quickly runs into Doom's Eye, who gives Shadow the usual goal of destroying the human military presence in the area. Meanwhile, Charmy Bee (on behalf of Vector) asks Shadow to help him look for five top secret disks. The Normal path sends Shadow straight to the Goal Ring near the end of the stage.

The following weapons can be found in Prison Island:

The Secret Door is located just past the third Save Point, with two Tank Cannons being found inside.

There are more than 40 Gun Beetles and GUN Troopers in this level, but some are hidden in optional areas. By each Save Point, the player must have defeated the following numbers of enemies:

The Goal Ring is not at the end of this Stage. The player will come across it a little while before the third top secret disk for the Hero Mission.

Get on the platform above the Goal Ring using the Triangle Jump to find the two remaining disks.

In Prison Island's Expert Mode, in the area where the original Goal Ring was, defeat the Black Arms and then bounce up. From there, use the Wide Spring to bounce high, and then use the Homing Attack on the Gun Beetle and then Light Dash across the newly formed rings. Later on in the stage, the player will have to take a ride on an Air Saucer that will take them to a platform with robots. Once there, the player must time their jump and bounce off the two Gun Beetles to get to the other Air Saucer. 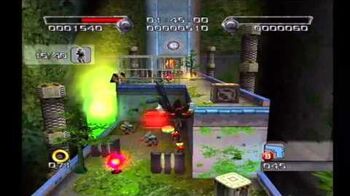 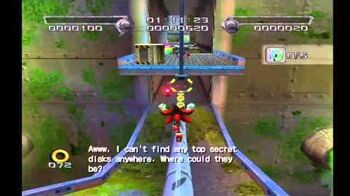 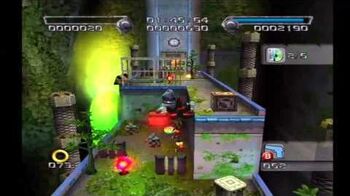 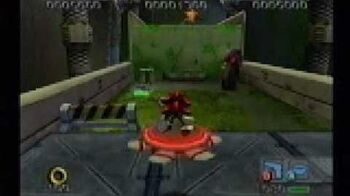