The Avatar in Prison Hall.

A prison set onboard a dangerous space station.

It's up to you to save Sonic now. Find him!

Prison Hall (プリズンホール, Purizunhōru?) is the fourth stage in Sonic Forces, and the second stage in the game to be played as the Avatar. This stage is a re-imagining of the Death Egg Zone from Sonic & Knuckles on the Sega Mega Drive.

Located onboard the Death Egg, this stage is set close to the space station's internment facility where the Resistance members are held captive. During the events of the game, the Avatar traveled through this location when the Resistance attempted to rescue Sonic the Hedgehog.

Being set on-board the rebuilt Death Egg, Prison Hall's environment is completely metallic. The stage in its entirety take place within dimly-lit halls of colossal sizes and narrow corridors, most of which are aligned with ominous-colored sci-fi neon lights.

The high-tech walls in this place have various pipes and triangular light panels on them, the latter of which are often arranged in hexagons. Metallic bridges, narrow walkways, and armored frameworks around pipes make up the paths throughout the stage. Alongside the paths in several places also are suspended rails that carry cargo through the Death Egg. In addition, there are several pillars in the background with Red Eyes in them that surveil their designated areas.

Sonic is being held captive within the rebuilt Death Egg's prison cells, and according to the Resistance's spy, Rouge, Eggman is planning on banishing him into space soon, having pushed Sonic's execution ahead of schedule. As such, the Resistance comes up with a plan to infiltrate the space station and rescue Sonic from his imprisonment using the shuttle they have stolen. The Avatar themselves accompany the Resistance on their prison break. Upon their arrival however, the majority of the rescue team is forced to deal with enemies. Only the Avatar manages to evade the enemies by taking the best route to the internment facility where Sonic is being held. Knuckles therefore leaves their rescue of Sonic in the Avatar's hands.

Along the way, the Avatar encounters various cells that originally contained several captured members of the Resistance or even civilians who refused to submit to Eggman's rule (with some comments made by Espio, Vector, and Silver implying that Eggman may have had them executed as punishment for their defiance[1]). However, the location ends up undergoing high alert (with Espio sensing Sonic's close proximity), forcing the Avatar to rush to Sonic's destination before it is too late.[2]

In Prison Hall, there are certain sections with Pullies whose handles first become available for the player to grab if all the enemies in the vicinity are destroyed. There are also yellow lift platforms that move either up or down once the player steps on them. While they mainly serve to help the player get past obstacles, these lifts will sometimes also simply drop the player into bottomless pits; such pits are marked with red lights in this stage to warn of their positions. In addition, there are certain alternate pathways in this stage that will be closed off with large doors if the player takes too long to reach them.

Like other Avatar stages, Prison Hall features numerous Wisp Capsules with Wisps for fueling the Avatar's different Wispons. However, any Wisp Capsule containing Wisps that do not match any of the Wispons the player has currently obtained will be rendered intangible and transparent until the player obtains their Wisp's associated Wispon. This means, for example, that if the player does not have a Hover Wispon, then the capsules with Green Wisps will be unobtainable.

The stage starts out with the player running down a ramp-like path with a number of sharp turns, which Avatar automatically drifts through using their grappling hook. Along the path, one can occasionally utilize Ramps on the middle of the path, which will take them to higher and faster routes down this path. Some of these higher routes will be closed off after a while however, so timing is everything to reach the higher paths before the doors close. Some sections along this path will also have bottomless gaps with Ramps that lead across them. After the third drift-curve on this ramp-like path, the player comes to a hallway. If the player has reached the higher area in this hallway, they can use a Dash Ring and Rainbow Rings to reach a path that spirals around; if the player ends up on the bottom of the hallway however, they must take the long route to the spiraling path.

While passing through the spiraling path, the 3D perspective will switch to 2.5D. Keeping moving forward from there and destroy any enemies that appear. Eventually, the player comes to a wall where some enemies will ambush the Avatar. Defeat them to make a Pulley drop. Grab this Pulley and the Avatar will be launched upward.

From there, keep going to the right and use the incoming lifts to go downward and over the next section. After using the next incoming Pulley, the player will find a Wisp Capsule with Wisps that one can use to travel through midair and gather Rings. In these higher areas, there will consecutive Wisp Capsules in the lair that the player can use to keep themselves in midair and gather Rings, while also avoiding enemies on the floor. After flying all the way to the right, move towards a series of lifts. Each lift there will take the player downward and allow them to keep moving forward.

Eventually, the player will enter another 3D-perspective running section where they will run along three lanes. These lanes are set at different heights. During this section, the player must use the Quick Step to switch lanes while running, or risk falling down to a lower area. It is best to stay on the highest route; if the player falls too far down, they will fall into bottomless pits. The top lanes will be assaulted by Aero-Chasers while the lowers lanes have spikes standing in the Avatar's way. Eventually, the player will reach the end of the running section, and the goal of the stage. 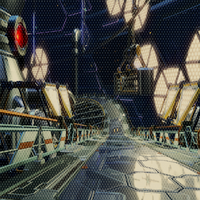