The Prison Capsule, from the Wii version of Sonic Colors.

A special Goal that marks the end of the stage

The Prison Capsule,[1] also referred to as the Goal Capsule,[2] is an object that appears in the Sonic the Hedgehog series. It is a large variant of the Wisp Capsule created by Dr. Eggman that marks the goal of the playable Acts, and destroying them is the key to finishing their Acts.

The Prison Capsules consist primarily of two vertical glass tubes. These tubes each stand on red feet and have red caps on their tops with a turquoise spike adorning each of these caps' apex. Inside the tubes is a transparent form of liquid energy with White Wisps floating around in it. Connecting the bottom of these two tubes is a red box with a glowing yellow mark that resembles a half-closed eye on it. Also, arranged on the ground in front of the tubes are four red cones, each with a turquoise spike on their top. Also worth noting is that two of the cones on the ground are taller than the two others. 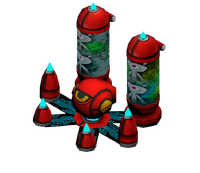