A decrepit printing press factory situated within a snowy forest.

The Zone is an industrialized ancient ruin repurposed as a printing house by Dr. Eggman to print the doctor's propaganda.[2] As with most other Zones in Sonic Mania and Sonic Mania Plus, Press Garden Zone is composed of two Acts, with a boss fight at the end of both.

The industrialization under the Meiji Shrine in Shibuya, Tokyo served as an influence for this Zone.[3]

Act 1 takes place inside an old printing press factory in an ancient castle, which is used by Dr. Eggman to print his propaganda.[1][2] Possessing a factory environment, wooden crates, metal crate frames, and conveyor belts can be seen throughout the Act. In the background, rolls of newspapers are seen zooming by. Those that move vertically have Sonic's face and those that move horizontally have the Phantom Ruby included on them. Snow-covered windows are also seen and pink vines grow everywhere.

Act 2 takes place in a surreal winter wonderscape within a Japanese garden outside of the castle, which has been described as the "true beauty" of Press Garden Zone.[1] This area is filled with cherry blossoms and ancient architecture. Snow covers as well the ground, glowing lanterns can be seen in the distance, and snow and cherry blossom leaves fall from the sky.

Still on the hunt for Dr. Eggman and the Phantom Ruby, Sonic, Tails, and Knuckles arrive in Press Garden Zone via Hang Gliders. Along the way, they manage to destroy Eggman's local propaganda factory after making its guardian robot, Shiversaw, blow up.

At the end of the Zone, Sonic and co. come under attack by the Heavy Shinobi, another one of the Hard Boiled Heavies, but are able to defeat him. Shortly thereafter, they find Eggman who is working hard on locating Metal Sonic on Little Planet, which is once again mechanized and chained to the planet's surface. Upon noticing Sonic, Tails, and Knuckles, however, Eggman uses the Phantom Ruby's power to warp the heroes to Stardust Speedway Zone.

Having used Hang Gliders to reach Press Garden Zone, Sonic, Tails, Knuckles, Mighty, and Ray eventually land in Dr. Eggman's rebuilt propaganda factory. Resuming their mission to retrieve the Phantom Ruby, the heroes make their way through the factory and eventually destroy its guardian robot, Shiversaw, who takes the propaganda factory with it to oblivion when it blows up.

At the end of the Zone, the group of heroes is attacked by the Heavy Shinobi, another one of the Hard Boiled Heavies. After defeating the robot, Sonic and co. find Eggman while he is working on locating Metal Sonic on Little Planet, which is once again mechanized and chained to the planet's surface. No sooner, however, Sonic and co. gets spotted by Eggman, who then uses the Phantom Ruby to teleport the heroes to Stardust Speedway Zone.

Press Garden Zone Act 1 allows players to reach great jumping heights through the use of Launch Base Zone's rotating tubes. Local Conveyor Belts can also be used to achieve elevated jumps, having been modified so the player can bounce off of them, and by holding down a button the player can increase their bounce's height. Also, touching the wheels of a Conveyor Belt will catapult the player in the direction they are spinning. Act 1 also has lights on the walls and ceiling that, when broken, will cause doors to open and platforms to slide forth, thus creating new routes. There are also typewriter blocks in Act 1's background that serve as additional platforms.

Several fragile crates can be found throughout Press Garden Zone Act 1, which can be destroyed with the Bubble Shield's Bound Jump or the Fire Shield's Fireball Spin Dash. These crates sometimes hide Item Boxes, so destroying them might prove beneficial. There are also giant presses in Act 1 that can take the player to higher areas (like elevators) when stepped on. These presses are kept from crushing the player against the ceiling by crates stacked on them, although a press will gradually break through them and ultimately crush the player if they do not get off it quickly enough.

Press Garden Zone Act 2 features snowblowers that can freeze the playable characters. When frozen, the player can slide around as an ice block to reach non-accessible areas, mow down obstacles and enemies, or shred tree trunks to access areas blocked off by the aforementioned trunks. This Act also has Spin Jump-susceptible ice blocks everywhere with different objects inside them (like Rings, Springs, Item Boxes, and spikes).

In terms of unique objects, Press Garden Zone Act 2 has arrow columns that shoot horizontal-moving Asterons. These Asterons both cause damage upon touch and act as temporary platforms when they get embedded in walls. There are also woodcutting machines that grind up tree logs into wood chippings when the characters stand on the logs, although the characters can get hurt by the machines too if they touch them after the logs are shredded down completely. Act 2 also has Springs that can be used only once and ice spikes that can be destroyed with a Fire Shield.

Act 1 features Conveyor Belts that can be used to get through many obstacles in the Act.

In Act 2, snowblowers are scattered all around, which can sent the player sliding across the floor in an ice block. This allows the player to destroy ice blocks that are littered throughout the Act.

The boss of Press Garden Zone Act 1 is Shiversaw, a floating robot armed with saws. At the start of the battle, the characters fall into a room full of crates. Shiversaw then arrives and immediately shatters one of its blades against a crate. Shiversaw's method of attack is launching its sawblades towards the characters. Shiversaw points the closest sawblade to the player character toward them to keep Shiversaw protected. The player must lure Shiversaw into shattering its sawblades against hard objects, which leaves it vulnerable to attack. Hit Shiversaw six times to defeat it.

The boss of Press Garden Zone Act 2 is the Heavy Shinobi, one of the Hard Boiled Heavies. The Heavy Shinobi will arrive into the boss arena with a wide slash and attempt to catch the player off guard. He attacks by using his sword to freeze the characters or by throwing Asterons as exploding throwing stars. To defeat the Heavy Shinobi, he must be interrupted during his jumps, which stuns him and allows him to be hit. Eight hits will dispatch the Heavy Shinobi. 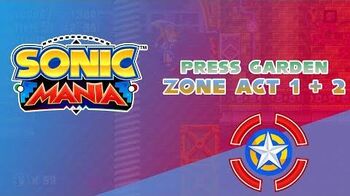