The President's escape pod[1] is a vehicle that appears in Shadow the Hedgehog. It is the private escape shuttle used by the President of the United Federation during the Black Arms' invasion of earth.

The Escape Pod was first used when the Commander arrived to evacuate the President from the White House to a safer location, unaware that Shadow the Hedgehog was pursuing it on the orders of Black Doom.

In gameplay, the President's escape pod appears during Air Fleet where it is being transported through the massive aircraft on a monorail track. In the Dark Mission for this Stage, the player's objective is to destroy the escape pod in order to take down the human resistance. It is too far away for melee attacks, so the player must use firearms to reach it. According to the Stage's mission, the player can use the junction switches to guide the escape pod down the most favorable paths. After taking too much damage, the escape pod is forced to land in the GUN Fortress. 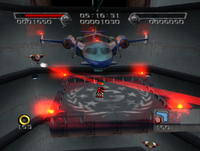 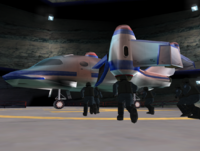