For other uses, see President (disambiguation).

The President, from Shadow the Hedgehog.

This planet was once safe from tyranny and annihilation by you two heroes. Now mankind must protect this peace at all costs. We must stand united to defend our world against these invaders!

— The President, Shadow the Hedgehog

The President (大統領, Daitouryou?) is a character in the Sonic the Hedgehog series. He is the head of state of the United Federation. He resides in Central City in a building named the White House.

The President is a peach-skinned human man with brown hair and blue eyes. For attire, he usually wears a blue suit with a white shirt, a red tie with small white dots, and dark brown shoes. He has also been shown to wear a dark navy suit with a maroon tie that possesses thin gray stripes.

The President first appeared in Sonic Adventure 2, when Sonic the Hedgehog and Miles "Tails" Prower catch up to his limousine on Central City's Route 101 in order to use his computer to pinpoint the location of Dr. Eggman, as the doctor had contacted the President seconds earlier supplying an ultimatum: that he either let Eggman take over the country, or he will use the Eclipse Cannon to wipe out every single major city in the United Federation, and planned on giving him 24 hours to decide, although Sonic's arrival forced him to abandon the ultimatum.

In Sonic Battle, the President learned that Dr. Eggman had gotten his hands on the Gizoid, a dangerous ancient weapon. Three days later, he sent Rouge out to handle the situation.[1]

The President makes his next major appearance in Shadow the Hedgehog, where he holds an admiration for Sonic and Shadow for saving the world in Sonic Adventure 2 (he also has a picture of the two heroes posing in front of the White House), and appears in several cutscenes trying to deal with the alien invasion of the Black Arms.

In the game's Last Story and true ending, he is seen at the Guardian Units of Nations Headquarters where he and the rest of the people at the base see a recording of Professor Gerald Robotnik. The recording gave Shadow the motivation he needed to save the world once more by vanquishing Black Doom and eliminating the Black Arms for good by destroying the Black Comet with the Eclipse Cannon. The President realizes that the Professor truly was a hero and helped save the entire human race, he then vows to make a brighter future, paying homage to Gerald which the GUN Commander calls an excellent idea.

In Sonic the Hedgehog (2006), the President requested Shadow to go on a mission to rescue Rouge from White Acropolis, something which Shadow informed Rouge of when he found her.[2]

The president is briefly mentioned by Rouge the Bat during Sonic Heroes; if Team Dark stays still for some time, she will say: "I haven't seen the President lately."

In Sonic Chronicles: The Dark Brotherhood, the President is mentioned in G.U.N.'s codex entry, as well as in Rouge's.

In the Sonic the Hedgehog comic series and its spin-offs published by Archie Comics, the President is namely the president of Station Square and the leader of the United Federation. After the agreement with Kingdom of Acorn, he authorized a nuclear strike on the Robotropolis and took part in an all-out war with the Eggman Empire.

After the events of Worlds Collide, the President became virtually identical to his game counterpart. 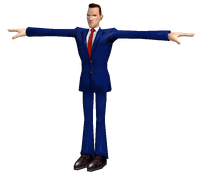