Prefect Scylla (スキュラ・ザ・ギゾイド, Sukyura za Gizoido?, lit. "Scylla the Gizoid") is one of the two prefect Gizoids of the Nocturnus Clan, the other one being Charyb. Scylla uses fire-based attacks to take down his opponents, as opposed to Charyb, who uses water-based attacks. His POW Moves are Immunity, Regenerate and Mighty Slash.

He faced Knuckles' team on Nocturne in order to prevent them from draining the water in Charyb's lair, which would allow Sonic's group to defeat him. Although he was powerful, they managed to defeat him and assist Sonic's team.

Scylla is the opposite of Charyb; playful and mischievous. He was said to have been "always a madman," as stated by Shade, proven by his maniacal laughter in almost every sentence and one of his eyes halfly lit as if partially closed or twitching. Scylla also insults Knuckles by calling him a porcupine when his team first encounters him, but correctly refers to him as an echidna later. 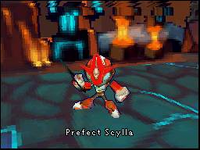 Scylla during his boss battle, from Sonic Chronicles: The Dark Brotherhood.