Charyb is a blue Gizoid that is built much differently than the others; he is able to fight underwater and use water-based attacks. When Charyb is in the water, he is almost invincible (taking only one point of damage per hit despite the strength of an attack). His POW moves are Immunity, Regenerate and Mighty Slash.

When Sonic and Tails' group tried to fight him, the condition of his lair made him impossible to stop. When Knuckles' and Shade's group took out Scylla, they drained the water from Charyb's lair, allowing them to defeat him. He is more serious than his partner Scylla. 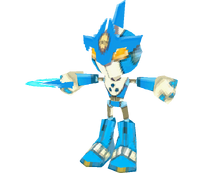 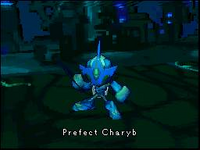 Charyb during his boss battle, from Sonic Chronicles: The Dark Brotherhood.