A silver Board type Extreme Gear with maximum endurance.

The Powerful Gear (パワフルギア, Pawafurugia?) is a Board type Extreme Gear that appeared in Sonic Riders. It possesses the highest endurance of all the Extreme Gear in the game.

In terms of shape and forms, the Powerful Gear is very similar to the Power Gear. It mostly resembles a basic silver board, with silver accents and metal blue outlines on the sides.

As a Board-type Extreme Gear in Sonic Riders, the Power Gear is well-balanced in its attributes with average statistics, an average rate of fuel-consumption and is suited for general riding.

The Powerful Gear possesses no special abilities of its own, but it has one of the highest Power stats of all the Extreme Gear in Sonic Riders. This grants the Powerful Gear maximum endurance, allowing the user to travel uphill and over rough terrains and inclines, without the rider losing any speed at all. 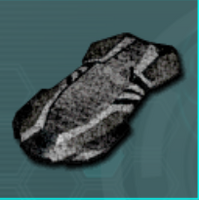