For other uses of the term, see Power Sneakers (disambiguation).

Sonic with a case of Power Sneakers, from Sonic the Comic #73. Art by Keith Page.

The Power Sneakers,[1][2] also referred to as Power Boots,[3] are objects that appear in the Sonic the Comic series published by Fleetway Editions. It is a unique pair of trainers worn by Sonic the Hedgehog, specifically designed to reduce friction on his feet.

The Power Sneakers are a pair of smooth red trainers with pointed toes, white sock-like cuffs and a white strap over their middles. Originally, they had no soles, being completely red on the bottom. Over time however, they gained visible white soles.

As per their design, the Power Sneakers are made of a material that reduces friction, meaning they do not wear out. This is useful to Sonic as his speed would quickly burn through any other pair of shoes. They also allow him to run at his full potential.[1]

Having been used by Sonic for so long, the Power Sneakers contain a bit of his "high-speed energy," granting those that wear them Sonic-like speed. However, this energy does not last for long and can be more of a hindrance if the user does not know how to control their speed.[3]

The Power Sneakers were created and given to Sonic by Dr. Ovi Kintobor (Sonic had, until this time, worn a tatty pair of trainers). During Sonic's first use of the Power Sneakers, on the Kinetic Gyratoscope, he managed to break the sound barrier for the first time. The resulting shockwaves fused his spines and turned him from his original brown into his more familiar streamlined, blue shape.[1] Sonic has many identical pairs of Power Sneakers.[2]

Sonic once replaced his regular Power Sneakers for a new pair with extra grip, but his intense speed (as well as a battle against Robotnik and Robofox) melted them after their first use.[4] Shortly afterwards, a squirrel named Tufftee found some of Sonic's old Power Sneakers and ran off, hoping their "high-speed energy" would help him battle Robotnik. They allowed Tufftee to run all the way to the Marble Zone, where he was captured by Badniks and had to be rescued by Sonic. Sonic later took the Sneakers back, claiming that they only worked for him.[3] 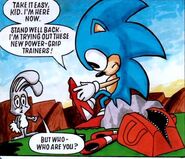 Sonic trying out his extra grip Power Sneakers, from Sonic the Comic #2.
Add a photo to this gallery

Retrieved from "https://sonic.fandom.com/wiki/Power_Sneakers_(Sonic_the_Comic)?oldid=2179613"
Community content is available under CC-BY-SA unless otherwise noted.