For the enemy that debuted in Sonic Mania, see Pointdexter (Classic).

A Pointdexter, from Sonic the Hedgehog 3.

It drifts along, surprising you with sprouting spikes.

The Pointdexter[1] (ポイントデクスター[2], Pointodekusutā?), later known in Japan as Puff (パフ[3], Pafu?), is an enemy that appears in the Sonic the Hedgehog series. It is a mass-produced, pufferfish-based Badnik model created by Dr. Robotnik.

Based on the pufferfish, Pointdexters have grey bodies with spikes all around, a blue face and occiput with yellow borders.

In Sonic Rivals 2, the Pointedexters appear on a card that can be collected by getting a high score from Sunset Forest Zone's Boss Act.

The Pointdexters are adapt swimmers and can protrude metal spikes from their bodies, the latter of which makes a direct attack on them very painful.

Pointdexter also appeared in several issues of the British publication Sonic the Comic, after Doctor Robotnik's discovery of Floating Island. In this continuity, they are able to float through the air, much like Bubbles from the Marble Garden Zone in Sonic 3. In their first appearance in the comic, Pointdexter appeared in this zone.[4] 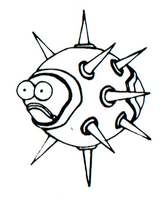