For the enemy that debuted in Sonic Mania, see Poh-Bee (Classic).

A Poh-Bee, from Sonic the Hedgehog CD.

The Poh-Bee[1] (ポービー[2], Pōbī?, lit. "Poh Bee"), also known as the Robot Bee,[3] is an enemy that appears in the Sonic the Hedgehog series. It is a mass-produced, bee-based Badnik model created by Dr. Robotnik.

Based on bees, Poh-Bees have yellow thoraxes with small transparent wings on their back, and black abdomens with a yellow stripe which have either rail cannons or chained black maces with gray spikes attached to where their stinger would be. They also have black eyes with green sclera, red antennas and yellow mandibles.

In Sonic the Hedgehog CD, Poh-Bees appear as enemies and are encountered in Wacky Workbench and Metallic Madness.

In gameplay. the Poh-Bees come in two types, each with a different attack pattern. The first type is found at Wacky Workbench. Similar to the Buzz Bombers, they fly back and forth within their designated area. When the playable character gets close to them though, they will fire an energy projectile in a set angle towards them from their stinger. After that, they will resume flying back and forward, and attack again if necessary. In the Bad Future or sometimes in the Present timeline of the Round, these Poh-Bees show signs of decay. They also fly slower and are unable to fire fireballs.

The second type of Poh-Bees appear in Metallic Madness, which have two maces attached on their abdomens by chains. These Poh-Bees come as well in different variants: some may only have one mace while others have two that hang from chains of different lengths. For attack patterns, they fly back and forth within their designated areas while swinging their maces in different directions. The player will take damage by touching the maces, but they can pass through their chains without suffering harm. In the Bad Future or sometimes in the Present timeline of the Round, they show no sign of decay. In addition, they fly slower and only have a single mace to attack with.

Both types of Poh-Bees can be defeated with the Spin Jump. Also, like every Badnik in the game, they are powered by Little Planet flower seeds which will pop out of them after being defeated.

Poh-Bees are capable of flight. Their abdomens are also either equipped with maces on chains that they can use offensively or stingers that can shoot fireballs. 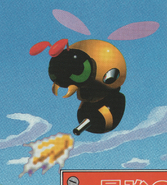