Pink Wisps can be somewhat harsh, but they are in fact very kind by nature. You’ll often find them near walls. Utilize the powers of the Pink Wisps to transform Sonic into the Pink Spikes so he can move around easily in all directions when on a wall.

The Pink Wisp (ピンクウィスプ, Pinku U~isupu?) is a creature that appears in the Sonic the Hedgehog series. It is a type of Wisp that grants the Pink Spikes Color Power.

The Pink Wisps have sphere-shape bodies with three tentacles each, two of which are used as arms. They have one light blue eye in the center of their heads and five short spikes on top of each of their heads. As their name implies, their skin color is hot pink.

In gameplay on the Wii version of the game, the Pink Wisps appear as Wisp Capsule power-ups that enables the Pink Spikes. The player encounters the Pink Wisps in Tropical Resort, Sweet Mountain, Starlight Carnival, Planet Wisp and Asteroid Coaster.

In Mario & Sonic at the Sochi 2014 Olympic Winter Games, the Pink Wisp makes an appearance during the Dream Event "Sonic's Figure Skating Spectacular". Here, a Pink Wisp is one of the Wisps that the four participating characters free from a Wisp Capsule as the player(s) proceed down the event's course. When the player then has to defeat the Rotatatron, the Pink Wisp will appear alongside several others Wisps and join up with the four characters to perform the Final Color Blaster, which deals the final blow on the Rotatatron.

In Team Sonic Racing, the Pink Wisps appear as Item Box power-ups on the game's race tracks. They are exclusively picked up by Power-Type racers, but can be transferred to other character types via Item Box Transfer. In gameplay, the Pink Wisp power-ups allow the player to manifest Pink Spikes around their playable character which can damage other racers when they come into contact with them.

In the comic tie-in, during one of the early races in Dodon Pa's Grand Prix, a Pink Wisp was used by Vector as a part of a collaboration attack on Dr. Eggman, who had intruded on Team Sonic and Team Dark's race.[2]

Being Wisps, the Pink Wisps are halcyon and social. Overall, they are peaceful, playful, non-hostile and friendly of nature, and enjoy spending most of their time playing with others. While they are not fighters, they are nonetheless brave and very helpful towards their friends and allies.

Pink Wisps can be somewhat harsh towards others, but they are actually very kind by nature. They prefer to be near walls.[1]

The Pink Wisps are able to levitate in midair at will, which serves as their main method of transportation.

The Pink Wisps are able to generate and store their own unique variant of a powerful energy known as Hyper-go-on inside their own bodies, which is their life source. It is unclear to what extent they can use their own Hyper-go-on, through they have been shown being able to use it to revert Nega-Wisps back to normal, teleport objects and even restrain black holes made from Hyper-go-on.

The Pink Wisps are able to pass on a fraction of their Hyper-go by phasing into the recipient. When organic beings or robots receive their Hyper-go-on, they can transform into the Pink Spikes which possesses sharp spikes for both combat and wall climbing. Alternatively, the Pink Wisps are able to manifest the Pink Spikes form themselves without phasing into a recipient.

The Pink Wisps made an appearance in the Archie Comics' adaption of Sonic Colors, in Sonic the Hedgehog #219.

In the comics, a Pink Wisp and a few other Wisps were chased by Orbot, Cubot and a pack of Egg Pawns, but were saved by Sonic. After Sonic destroyed the Egg Pawns in a flash and send Orbot and Cubot running. A Pink Wisp then joined Sonic, Tails, Yacker and some other Wisps, as Sonic ventured out to save the Wisp race from Eggman.

In the Sonic the Hedgehog comic series and its spin-offs published by IDW Publishing, the Pink Wisps are aliens from Planet Wisp. Much like in the games, some of them have settled down on Sonic's world where they help out the planet's inhabitants from time to time. 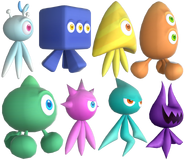