When the beast is complete, its dark arms shall encompass the planet, ushering in the end of times. The world, in death, will fall into a deep sleep in waiting for the time of rebirth to come.

Perfect Dark Gaia (パーフェクトダークガイア, Pāfekuto Dāku Gaia?) is a transformation that appears in the Sonic the Hedgehog series. It is the completed form of Dark Gaia, achieved when the beast reaches full maturity for the time of awakening, making this form the representation of Dark Gaia's true nature as a deity of darkness and destruction.

Basically, Perfect Dark Gaia resembles its immature form, but with extra features. Once matured, it grows four extra arms and its large mouth opens up, revealing hundreds of tongues which give way to seven aligned green eyes; three smaller ones on the sides and one large in the middle. It also gains two long tongues hanging out from each side of its central eye. Its seven tentacles (seen only in the Xbox 360/PlayStation 3 version) also move down its spine and their ends gain more shape, resembling snakeheads with smalls Mohawks and a green eye in their mouth.

Every few millions of years since the beginning of time, Dark Gaia has assumed this form when emerging during the time of awakening to destroy the earth, only to engage Light Gaia. At the end, Light Gaia defeats Perfect Dark Gaia and seals it and himself in the planet's core where they rest until their next battle.

In Sonic Unleashed, when the world was broken apart by Dr. Eggman's Chaos Energy Cannon, Dark Gaia was interrupted during its maturing process due to its premature awakening. As such, its power scattered across the broken planet when it tried to emerge. However, Dr. Eggman devised a way to summon the fragments to Eggmanland and harness it as a fuel source. Eventually, Eggman collected enough energy for Dark Gaia to assume an incomplete physical form and emerge in the planet's core. Absorbing the remaining part of its power from Sonic the Werehog, Dark Gaia would regain its full power during its fight with Sonic and the Gaia Colossus and mature into Perfect Dark Gaia after casting the planet into darkness. Before it could utterly destroy the planet though, Dark Gaia was forced to fight the combined forces of Super Sonic and the Gaia Colossus. After an epic battle, Perfect Dark Gaia was defeated and sealed in the planet's core again until its next awakening.

Perfect Dark Gaia wields the same abilities as its premature form, but at the peak of its strength and capabilities due to having regained its full power.[1] In this state, Perfect Dark Gaia is one of the most powerful beings in the series, being able to injure a Super State through the brute force of its attacks. It could as well occasionally overpower its equal, Light Gaia, while taking on Super Sonic at the same time and wear him down to the point where he fainted from exhaustion.

Having reached full maturity, Perfect Dark Gaia's immense super strength and endurance have increased further. It is capable of completely immobilizing the Gaia Colossus in its grip and even overpower him in extended hand-to-hand combat. It can also channel extremely powerful energies into a more extensive variety of attacks than before; it can shoot large beams from its central eye without losing focus should the process be interrupted (unlike its premature form), project purple orbs, launch black orbs with paralyzing effects, and channel its energies into its claws for enhanced slashes.

Perfect Dark Gaia's weak points remain its various green eyes, like its earlier form, which are highly sensitive to damage. It is also not immune to its own power, meaning it will take damage from its own energy attacks should they be knocked back.

Perfect Dark Gaia, from the Wii/PlayStation 2 version of Sonic Unleashed.

The final strike to take down Dark Gaia on its finished form. Super Sonic has to strike toward the central eye in the right time.

This battle is lengthy and tough. While collecting Rings, the player must move in the direction of Perfect Dark Gaia's still-open eyes, and when in front of one, a red target reticle will appear, indicating an opening. Such an opening also occurs when Perfect Dark Gaia roars. Upon launching the Super Sonic Boost at an eye, the player controls Super Sonic as he flies towards it. If the attack successful connects, the player wounds the eye and starts the process over again. With each eye though, meteors start appearing during the attack on the eye. Try to anticipate their trajectory and maneuver accordingly. If hit, Super Sonic will not lose Rings, but his attack gets canceled.

During the battle, Perfect Dark Gaia will attack mainly with its claws. As the beast cocks its arm back, a faint slash ﬂashes onscreen, illustrating where the attack will land. The faint slash is followed quickly by the actual attack, so move quickly to avoid it. As the player attacks more of Perfect Dark Gaia's eyes, it will slash faster and use all its six claws simultaneously. Quickly move to the screen's center to avoid the latter attack. Eventually, Perfect Dark Gaia will also start firing energy projectiles at Super Sonic. Follow the onscreen button press at just the right moment to deflect the shot back at the source. This will temporarily stun Dark Gaia, allowing the player to collect rings and target its remaining eyes. After hitting six eyes, Perfect Dark Gaia will reveal its central and much larger eye. After hitting this eye, Dark Gaia is finally defeated.

The time needed to "S" Rank is a total time of 7:30 between this boss and the previous one. Failure to make that time will yield a "C" Rank. Therefore, no Sun Medal will be awarded. 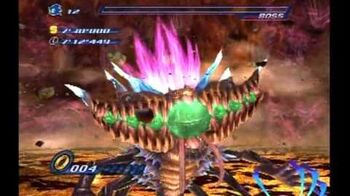 The final strike to take down Dark Gaia on its finished form. Super Sonic has to destroy all serpent heads to break the large shield while Gaia Colossus takes it down inside the shield.

Perfect Dark Gaia is the overall eleventh and final boss of the Xbox 360/PlayStation 3 version of Sonic Unleashed. It is fought with Super Sonic directly after defeating Dark Gaia. The battle has Super Sonic take down the tentacles of Perfect Dark Gaia before engaging in a series of Real-Time Interactions.

Once the shield is down, the player enters a cinematic gameplay section. Here, Perfect Dark Gaia grabs Chip with its six arms and starts charging its laser. Super Sonic goes in to save Chip by boosting into all six arms, which is done in gameplay by completing a button-pressing Real-Time Interaction (

). After that, Chip is freed and leaves Perfect Dark Gaia in agony, but it has still charged enough to shoot its laser at Chip. Chip takes heavy damage from the laser, but withstands (which is done in gameplay by pressing

sixty times within ten seconds). After negating it, Chip punches Perfect Dark Gaia. Super Sonic then comes in, and the player will have two options; either finishing Perfect Dark Gaia by boosting through its middle eye, or let Super Sonic gets it automatically. The boss ends immediately after that.

To achieve an S-Rank, the player has to just avoid hitting any of the floating rocks and evade Perfect Dark Gaia's attacks. Losing a life in this battle or the player's performance in the previous battle against Dark Gaia do not affect the player's Rank. 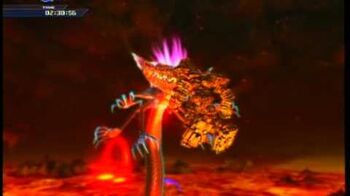 In the Sonic the Hedgehog comic series and its spin-offs published by the Archie Comics, Perfect Dark Gaia appeared in at the end of the Shattered World Crisis story arc. Like in Sonic Unleashed, Dark Gaia achieved this form after regaining its full power, where it was defeated by both Super Sonic and the Gaia Colossus.