The negative chaos energy of the seven Chaos Emeralds

That creature is more powerful than all of us. It can't be stopped.

Perfect Chaos (パーフェクトカオス, Pāfekuto Kaosu?) is a transformation that appears in the anime series Sonic X and its comic series published by Archie Comics. It is one of Chaos' two Super States, achieved by absorbing the negative chaos energy of all seven Chaos Emeralds.

Many generations ago years, Chaos assumed this form to destroy the Knuckles Clan and the rest of the world, but was sealed away in the Master Emerald by Tikal. In the present day when Chaos was brought to Earth, Dr. Eggman would attempt to harness Perfect Chaos' power for world conquest, resulting in Chaos going on a rampage each time. Each time though, Perfect Chaos was defeated and calmed by Super Sonic.

Standing as vastly more different than any of Chaos' previous forms, Perfect Chaos is a several-stories-tall monster resembling a cross between a snake and a plesiosaur composed entirely of pure chaos energy in liquid form. Its head resembles a snake with razor-sharp teeth and a large mouth that extends far beyond its eyes, which are green and have slit-like pupils. It also has flaps of skin hanging from just behind its eyes, pumps down its neck, and a fin on top of its head which contains its organic brain. It possesses a massive body and back compared to its head which is nothing more than an enormous pile of "flesh", and it has at least four long and thick tentacles attached to it. The majority of its skin is dark blue while its underbelly is light blue.

Generations ago, chief Pachacamac of the Knuckles Clan and his men attacked the shrine in Mystic Ruins, home to Chaos and the Chao it protected, to seize the Chaos Emeralds there for their war efforts, injuring both the Chao and their friend Tikal in the process.[2] Seeing its sacred precincts being invaded filled Chaos with anger and sadness.[1] Using the Chaos Emeralds, Chaos became Perfect Chaos and vaporized Pachacamac and his men before destroying the tribe. However, Perfect Chaos, now corrupted by anger and rage, would not stop its destructive impulses and would have destroyed the rest of the world had it not been for Tikal, who sealed herself and Perfect Chaos inside the Master Emerald, returning Chaos to normal.[3][4]

Six months after the Master Emerald was transported to Earth, Chaos was freed by Dr. Eggman, who sought to transform it into Perfect Chaos and use it as a weapon to destroy Station Square and build Eggmanland on it.[5] Still brimming with rage, Chaos remained under Eggman's command while the doctor collected the Chaos Emeralds so it could continue its rampage on Earth. When Eggman failed, Chaos rebelled against Eggman and went after the Chaos Emeralds itself, eventually becoming Perfect Chaos once more.[4]

Perfect Chaos soon after appeared in Station Square and began destroying it with a destructive flood. GUN, Sonic the Hedgehog and the X-Tornado counterattacked, but they were no match for Perfect Chaos. No sooner, Dr. Eggman attacked it with the Egg Carrier 2, but Perfect Chaos obliterated the vessel with a single energy beam. At that point, Perfect Chaos had absorbed all of the negative chaos energy from the Chaos Emeralds and regurgitated the emeralds. This act proved to be Perfect Chaos' own undoing, as Sonic harnessed the emeralds' positive chaos energy to transform into Super Sonic. Perfect Chaos used every ability at its disposal, but none of them had any effect on Super Sonic, who redoubled his efforts to defeat Perfect Chaos after blocking an attack on his friends that Perfect Chaos attempted. In the end, Super Sonic plowed into its body and blew it to pieces. With its defeat, Perfect Chaos reverted back to normal as Chaos 0, and with its anger neutralized by Super Sonic's power, it returned to the benevolent creature was before.[4]

While residing within the Master Emerald, Chaos was pulled out of it and force-fed the seven Chaos Emeralds by Dr. Eggman's Greenbots, causing it to transform into Perfect Chaos once more. This time however, Perfect Chaos was fused to a robotic shell made from the Greenbots as it transformed, creating a more powerful form called "Chaosbot".[6] As Chaosbot, Perfect Chaos was under Dr. Eggman's command, but it was able to fight his control long enough for Sonic to get the Chaos Emeralds, become Super Sonic and restore its free will. Once Super Sonic destroyed its robot shell, Perfect Chaos reverted back to normal.[7]

With all the negative chaos energy from the seven Chaos Emeralds fueling it, Perfect Chaos is a monster of limitless power.[7] It possesses unprecedented size and might so great that it can easily lay waste to the entire world and is regarded as virtually unstoppable.

Perfect Chaos' hydrokinetic powers in this form have been enhanced to unprecedented heights, reaching the point where it can control entire floods and flood Station Square in a matter of seconds with colossal tidal waves and local water sources. It can as well manipulate water in a more delicate manner, such as shooting waterspouts like missiles and raising spires of water which it can instantly crystallize.[4]

Being made of liquid chaos energy, Perfect Chaos is nearly indestructible and can mimic the properties of water. It has complete control over its physical structure, allowing it limited shapeshifting, such as elongating its tentacles for greater range, change its shape into fluid liquid, and if dissipated, it can reconstitute itself again. Additionally, its body can absorb projectiles like a sponge and then spit them back out. It can as well merge with the water around it, allowing it to become one with its floods. Due to its size, Perfect Chaos has enormous strength, destroying entire buildings with one strike with its tentacles or even cleave them clean in half. Despite its size, Perfect Chaos has also remarkably fast movements and reflexes, tracking and reacting accordingly to even Sonic's movements.[4]

Perfect Chaos has the ability to project an immense energy beam from its mouth which packs enough power to obliterate the Egg Carrier 2 with a single shot and it can form a force field around itself which can block even missiles, though it can be shattered should enough force be applied.[4]

Due to being a creature of pure chaos energy, Perfect Chaos can apply limitless energies into maintaining its transformation, allowing it to stay in this form indefinitely. This gives it an edge over Chaos Emerald-users like Super Sonic who can only stay transformed for a short while.[7] 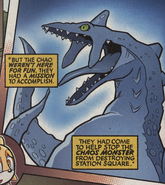