This boss takes place in the flooded Station Square with a cloudy sky and has two phases. It is also the only moment in the game to play as Super Sonic, who moves faster than his regular form. The path between the player and Perfect Chaos is a long route, where the player is only able to move during the boss battle. Some of the roadways from Speed Highway are also seen there as well, where the player is able to traverse. The route differs slightly depending on if the player succeeds or fails to hit Perfect Chaos' weak spot. In either case, the player moves to another section to do the same pattern.

From the beginning, the player has to watch their ring count, which typically, in Super Sonic's case, will decrease one Ring per second. The player can collect Rings on strings, that are set on roadways with Dash Panels, which can gain more speed for the player. Super Sonic is also able to gain a small amount of speed by jumping and moving forward. When the player has gained enough speed, Super Sonic will perform a Bolt of Lightning. If the Ring count manages to go zero during the battle, the player will lose a life and try again at the beginning of the battle.

Perfect Chaos has three major attacks to use against the player. The first one is shooting large, energy projectiles from its spires on its back towards the player. It can also summon large typhoons near him and its final attack is a large energy beam that it shoots from its mouth, which it used to destroy Egg Carrier 2. If the player gets hit by one of these attacks, they will get fly backward and loses all the maximum speed that has been gained. During the first phase, the player has to hit Perfect Chaos' brain three times while the game's main theme "Open Your Heart" can be heard in the background. In the second phase, a more darker, orchestral theme called "Perfect Chaos Revival! ...for Perfect Chaos" can be heard in the background, while the battle becomes quite harder in difficulty and the player has to hit the same target another three times to finish the battle. 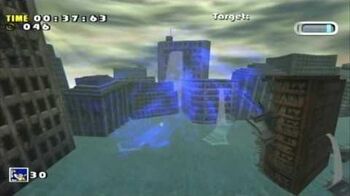