The oddly shaped pink lady is right. Holding grudges is no way to live a life.

Pepper was raised along with his brother Salty by their father to be sailors. When Salty later took the nautical compass left by their father for himself, Pepper and Salty formed a hostile rift between each other. Eventually, Pepper became the captain of his own ship and would occasionally battle his brother on the sea.[1]

At some point, Pepper was sent to Crater Lake by his brother where he was trapped by Swarming Hives, unable to escape despite his attempts. Eventually, Pepper was found by Team Sonic who informed him that his brother was looking for him, but he scoffed such concern and requested the team to get rid of the hives. Once the team returned from the mission, Pepper was moved by their devotion to reuniting people and was convinced to let go of his grudge and go to see his brother. Soon after, Pepper and Salty reminisced about their mother until Team Sonic came. As thanks for their efforts, the brothers gave them a Power Glyph.

Pepper has a keen understanding of the ways of the seas and a poetic sensibility.[1] He would hold long-held grudges, as demonstrated by his relationship with his brother, but after meeting Team Sonic he realized that this was no way to live life.

For most of his life, Pepper had an estranged relationship with his brother Salty. Even when they were raised by their father, Pepper was never respected by his brother. When Salty later took their father's compass, their relationship was strained to the point where they would not speak with each other and have a hostile confrontation.[1] In Pepper's own words, his brother was an idiot.

When Pepper was sent to the dangerous Craker Lake by Salty, his opinion about him did not improve. However, due to the efforts and consulting of Team Sonic, Pepper was convinced to bury the hatchet and therefore reunited with him upon Salty's request on good terms. 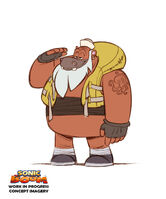