Pearly the Manta Ray, from Sonic the Hedgehog #260.

Pearly the Manta Ray is a character that appears in the Sonic the Hedgehog and its spin-off comic series published by Archie Comics. She is a mobian manta ray and the apprentice of Coral the Betta.

Pearly is a gray-colored mobian manta ray with celery pupils and black ires. She has a white muzzle and spots on both of her sides on her head. She has a dark-gray oval on the top of her head. She wears an orange dress, black leggings and a gold necklace with a green gem. Pearly's head is actually the shape of a manta ray, hence her name.

At some point in her life, Pearly was chosen by Coral the Betta to be her apprentice. She thus began to receive training from her in the rites. [2] Some time after that, Pearly and Coral found a wounded Razor the Shark, and nursed him back to health.[3]

Pearly was with Coral the Betta when Razor the Shark and Crusher the Chao returned to the outskirts of Meropis, escorting Sonic the Hedgehog, Amy Rose, and Rotor the Walrus (who are searching for Gaia Temples in order to restore the planet) to the Eusebes Temple. Pearly alarms Razor and Crusher and the other Freedom Fighters on Coral using the Mystic Melody to seal Aquarius inside a cocoon for it to be reborn. The next morning, Pearly was among the rest of the heroes when Coral was upset that Aquarius was not hatching from its cocoon. No sooner, Captain Striker the Mantis Shrimp and the Meropis City Guard arrive at the Eusebes Temple, questioning why the heroes were on sacred land.[4]

Sometime later, Pearly watched the world get restored by Chip, alongside Coral, Razor and Crusher.[5]

Naive, Pearly is childlike, gentle sweet and fascinated by mysterious and astronomical events, such as Aquarius' rebirth. She is usually a bit shy and reserved at first around new people, but warms up to them eventually, though she is earnest to the point of being a little pushy. She is devoted to helping and protect the Eusebes Temple and its Chao Garden, but she is wary when it comes to Chao to the point of being scared of them since she finds them very creepy.

As an aquatic mobian, Pearly is capable of aquatic respiration, allowing her to breathe both on land and underwater.

Coral the Betta is Pearly's teacher. The two of them share a close bond and Pearly absolutely adores and looks up to Coral, and is sincerely devoted to her.

To Pearly, Razor the Shark is like an older brother, and even though Razor likes to pester her, the two of them are very close. 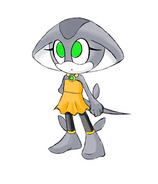 Early concept artwork
Add a photo to this gallery

Retrieved from "https://sonic.fandom.com/wiki/Pearly_the_Manta_Ray?oldid=2268768"
Community content is available under CC-BY-SA unless otherwise noted.