At Last, We Learn the Truth About Sonic!!

Paulie (ポーリー, Pōrī?) is a character in the Sonic the Hedgehog serialized manga published by Shogakukan. He is the husband of Brenda, father of Nicky and Anita, and a qualified pilot for the air mail. Nicky idolizes his father and wishes to grow up to be as strong and courageous as him. Years before Nicky's first transformation into Sonic the Hedgehog, Paulie knew of the blue hedgehog, but is not aware of his son's transformation.

In the Shogaku Ninensei stories, Paulie is an anthropomorphic hedgehog with light blue fur, similar to his son Nicky after his first transformation. Paulie has a pair of frontal hair, a stubbly beard, and usually smokes a pipe. He wears flying goggles, a brown pilot jacket with the "Sonic the Hedgehog" emblem printed on its back to protect him wherever he goes,[1] and red boots. In the cast picture of the Sonic the Hedgehog Book, Paulie is also seen wearing a muffler.

Paulie's appearance in the CoroCoro Comics Special stories is slightly different. Here, he a wears dark pilot jacket, white gloves, and a cap with the words "Hedgehog Air Service" printed on it that he gives to his son before the Ironman Race.[2]

One day, when Nicky asked Paulie about Sonic, he began telling his son about an event that happened twenty years ago. Working as a test pilot, he lost control of his plane, but then Sonic appeared at his side to guide the plane back to a safe place on the ground. Not only did Sonic save Paulie's life, but he also lead him to his future wife, Brenda. To Paulie, Sonic is a divine protector, the greatest hero that has ever lived, and also his cupid.[1]

When Paulie and Nicky got kidnapped by Dr. Eggman, Sonic appeared to Paulie's surprise after so many years, despite not knowing that Nicky was able to transform into him.[3]

This character's name is often rendered as the real-life "Paulie" or "Pauly" in translations among fans. However, it is most likely that his name is supposed to be a reference to the term "Roly Poly" (ローリー・ポーリー, Rōrī Pōrī?), given that he is a large hedgehog - a species well-known for rolling in a ball. 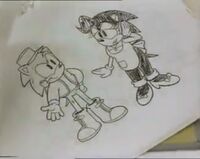 Early concept by Sega Software R&D Dept. 8
Add a photo to this gallery

Paulie (left) and his son, Nicky.

Retrieved from "https://sonic.fandom.com/wiki/Paulie?oldid=2285430"
Community content is available under CC-BY-SA unless otherwise noted.