"Party Hardly" is the seventh episode of the anime series, Sonic X. It first aired on 18 May 2003 and 18 October 2003 in Japan and the United States, respectively.

Chris tells Cream and Cheese to stay in his room until he gets back from school but as he leaves, the two quickly get bored and visit the balcony to see something exciting before she starts picking flowers. Amy and Tails were looking out at the window wondering why was Cream outside picking flowers since she is supposed to be inside when Tails then realizes that Cream is actually missing her mother. Sonic, who happens to have overheard the conversation, sees a nearby poster showing a meadow, quickly snatches it and then zooms downstairs, leaving Tails and Amy to wonder about the hedgehog's sudden disappearance. Meanwhile, Lindsey gives him the breakfast that she cooked badly when Ella comes in and is shocked to see Chris' breakfast. Lindsey then decides to throw a party and Chris asks her to invite Sam Speed, his favorite uncle and her brother. Lindsey agrees to invite him, unaware that Cream and Cheese saw everything and become excited about the upcoming party. After Chris' school is over, Mr. Stewart tells Chris that he's coming to his house in order to know his students better and also to meet his mother and obtain her autograph.

Meanwhile, back at the Thorndyke Mansion, Cream and Cheese go outside to pick more flowers to make a flower crown. After they go downstairs, they see Lindsey decorating the room for the party and wonder if they can help. Later on, Chris comes back home and tells his mother that Mr. Stewart is coming to the party. Chris' grandfather, Chuck, comes in wearing a tuxedo as Chris asks his grandfather to tell Sonic and co. to hide until Mr. Stewart and Sam Speed leave the party if he sees them. Chuck tells Chris that Tails and Amy are at his room and he didn't see Sonic, Cream or Cheese. They turned around and see Cream and Cheese decorating the room, much to their hesitation. Chris' mother asks what the problem is but Chris and Chuck manage to keep her from seeing Cream and Cheese by telling her to get ready for the party instead. Chris then asks Cream why she and Cheese didn't stay in his room when Cream tells him it's boring there and only wanted to help get ready for the party. However, Mr. Tanaka appears and Chris is shocked to find out that he knows about them. As Chris asks Mr. Tanaka to help him and Chuck to keep on a secret on Sonic and co.'s presence, Cream and Cheese leave. Ella is cooking the dinner for the party, but leaves the kitchen to help Chris' mother find the dress for the party. Cream and Cheese enter to the kitchen and see all of the food and turn on the kitchen appliances but end up creating chaos in the kitchen and run away just before Ella comes back to the kitchen. As Chris looks for Cream and Cheese, he hears Ella's scream and runs to the kitchen to see a big mess.

Later, Lindsey finishes getting ready for the party but she then gets a phone call saying that she should leave to prepare for filming for another movie. Cream then sees Chris' mother crying over the guilt she feels about being a terrible mother for leaving Chris alone and also for not taking care of him. She then tells Ella and Ella tries to look for Chris but he's still busy looking for Cream and Cheese. Lindsey tells Ella to give her sincerest apology to Chris as well as Mr. Stewart and Sam before leaving. Chris returns to the lab only to find Chuck, Amy and Tails. Chris panics that Mr. Stewart will arrive soon and so Chris, Chuck, Tails and Amy decided to search throughout the mansion to find Cream and Cheese. Eventually, Mr. Stewart arrives with a bunch of roses but is a bit disappointed when he finds out that Chris' mom had to leave right before his arrival. Mr. Stewart gives Ella the roses. Suddenly, they hear a crashing sound only to see Chuck lying on the ground outside with the flower pots. Ella snaps at Chuck and reminds him that Mr. Stewart has arrived and Chuck proceeds to climb into the house via the window to greet him, much to Ella's disgrace. Chris gets terrified upon seeing Cream's legs by the window and screams. Ella asks what the problem and Chris responds that it is nothing. Cream, who is staring out in the window notices Sonic standing on the tree holding some flowers. Cream thanks Sonic aloud, making everyone especially Ella turn to her attention and in particular, Ella picks up Cream and is severely shocked to see her talk but Chuck and Mr. Tanaka reassured her that talking animals are a joke. Chris picks Cream up while saying she is a toy but Ella still denies this statement. Sam Speed arrives, greets with Mr. Stewart and then tells everyone about his liking with speed, eventually beginning to discuss about Sonic, who is the only guy to surpass him in speed. Sonic meanwhile is mocking Sam at the window but when Sam notices him and then points at him; everybody turns to look out at the window. At that moment, Sonic flees. Chuck, Mr. Tanaka and Chris didn't see Sonic while Mr. Stewart is still busy admiring the picture. Sam still admits that he did see Sonic.

Chris tells Sam the news that his mother left, saying that it was rude of her to do so. This angers Cream, who inadvertently reveals herself as not a toy and yells furiously at Chris while saying he should be grateful that he can at least call his mother at any time; she can't do that with mother as she is back home on another planet. Cream then runs out of the room crying as Amy and Tails run past to her in hopes of comforting her, right in front of everyone. Mr. Tanaka reassures everyone that that is his ventriloquism act that he has been practicing for weeks. Shocked to see them, Ella almost faints but Chuck invites her to a dance instead in hopes of distracting her. The guests eventually leave. Later that night, Ella is tired and nearly breaks down from working too hard and seeing talking animals. Mr. Tanaka and Chuck suggest that Chris tell Ella about his secret. It is then Ella knows about Sonic and co., allowing them to move around the house without suspicion and Ella begins a friendship with Cream.

Chris however is sad, thinking that Cream is still angry at him, but Sonic assures him that everything will be fine. Cream then comes and gives Chris a flower crown and said that she got the flowers from Sonic and Sonic explains that Cream only gives them to people she likes. This makes Chris feel very happy while Chuck, Tails and Amy cheer on as Cream excitedly gives another flower crown to Ella. 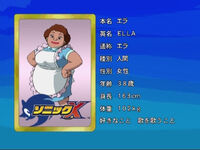 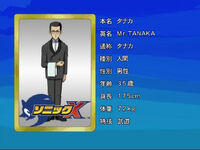 Mr. Tanaka
Add a photo to this gallery