The Blue Falcon firing the particle beam cannon, from Shadow the Hedgehog.

The particle beam cannon needs charging and once it's charged it shoots several horizontal electric shock waves in circle which can cause damage. To dodge the waves the player has too change the platform where Shadow is standing when the canon is charged. Sometimes the cannon is not fired until Shadow jumps to another platform or the G.U.N vehicle gets near Shadow.

The Particle Beam Cannon makes an appearance in the Sonic the Hedgehog comic series and its spin-offs published by Archie Comics. In this media, it is one of the weapons for the Freedom Fighters' Sky Patrol, though here it is a cannon that fires a yellow beam instead of a blue wave. It was first deployed to destroy the War Walrus when it was send to destroy the Sky Patrol. 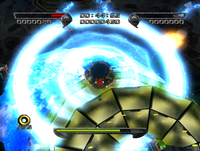 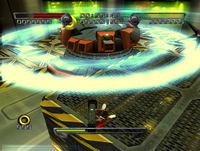 Retrieved from "https://sonic.fandom.com/wiki/Particle_beam_cannon?oldid=2358736"
Community content is available under CC-BY-SA unless otherwise noted.