Parched Palms is a track that appears in Sonic Forces: Speed Battle. It is unlocked in Tier 5, or upon reaching 1500 Trophies.

Parched Palms is a hard-difficulty track based in Green Hill. It is presented as a natural landscape with block-based brown mountains in the background and a lightly clouded blue sky. Like its original incarnation, the track features countless blocky hills in all manner of sizes and arrangements. Much of the stage is also covered in green-striped grass and the soil itself is covered in checkerboard patterns in different shades of brown. It also includes several tall palm trees, bright flora that include purple flowers and moving sunflowers, hard-pointed bushes, square-leafed ivy, and different types of Totem Poles with all manners of facial expressions. There are also a couple of wooden scaffolds.

In Parched Palms, the playable characters are stuck running down the level's road and can only move left and right between the road's four lanes (akin to the Quick Step). While running, the player can pick up Rings or power-ups from Item Boxes and utilize the gimmicks native to this track. Rings and Item Boxes in particular respawn almost immediately after a playable character picks them up from the track.

Parched Palms has many environmental obstacles which the player can either jump over, roll under or move around. Running into one of these obstacles will result in the player taking damage and lose some of their Rings. Falling into bottomless pits on the other hand forces the player to restart from an earlier point on the track.

The racers will begin on a small hill with Item Boxes nearby. The racers then must navigate around a number of obstacles and a pitfall before continuing to a large loop, then run through a section that contains Item Boxes in-between objects that racers must Slide under. After this section is a long stretch of track containing a large number of obstacles that must be sidestepped, which leads to a series of Dash Panels and hurdles that must be cleared. Finally, the racers will go through two more shuttle loops with a set of Conveyor Belts in between, and will find the finish line beyond a long series of Dash Pads and two sets of obstacles. 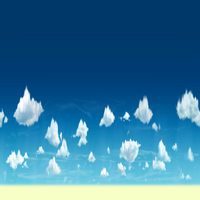