Sonic in Palmtree Panic, from the 2011 remaster of Sonic the Hedgehog CD.

Loop the loops, twist through corkscrew turns, find footing on hidden platforms, and spin the wheels to blast up vertical ramps. This Round promises plenty of action for a fleet-footed hedgehog! Hope you remembered to bring your mosquito repellent, 'cuz some of these enemies take a big bite!

Palmtree Panic (ヤシの木の混乱[2], Yashinoki no konran?, lit. "Palmtree Chaos") is the first Round of Sonic the Hedgehog CD. It consists of a coastal region surrounded by mountains, located on Little Planet. As with the other Rounds in the game, Palmtree Panic consists of two regular Zones and a third, shorter Zone that features the Round's boss.

Palmtree Panic is a tropical region with sharp mountains, scattered waterfalls in the background, a clean sky with white clouds, and fields covered in green grass. The soil is orange and brown and displays a triangular pattern. Palm trees with pink berries adorn the region, as well as star-shaped green plants that seem to litter the tropical coast. Sometimes, tree trunks with holes in them also appear on the highest mountain tops.

In the past, Palmtree Panic has a more prehistoric coast, with small, purple mountains, a turquoise sky, and fields covered in a lighter shade of grass than in the present. The soil retains the present version's triangular pattern, although it is now peach and brown-colored. Some palm trees have a light bulb-like feature on the top. The star-shaped plants are replaced with vine-like plants sprouting from the ground. Also, the tree trunks from the present now feature some small branches with leaves on them.

In the bad future, Palmtree Panic has been completely mechanized and polluted. It is full of dark gray tubes that have a lavender liquid running through them, some of which pour this liquid into a lake full of oil. The mountains are eroded and appear darker, lack the waterfalls they once had, and have small factories and machines on them instead. The sky is also pink with light pink clouds. The soil still features its triangular pattern, but it is now purple and dark gray, and is covered in dead orange grass. The palm trees are mechanical, with damaged gray trunks with machinery in them; orange leaves with a lavender liquid dripping from them; and glowing red light in the center. The star-shaped plants are orange as well, and are also drenched in the same liquid the palm trees have on them. The aforementioned tree trunks are dark gray as well and are even more damaged than before.

In the good future, Palmtree Panic is a bright, vivid, colorful, and clean tropical paradise. It has a turquoise sky, large mountains with vegetation and waterfalls on them, and a clean lake in the background. The soil features the same triangular pattern, though it is now brighter, and the fields are covered in lime grass. The palm trees are mechanized, like in the bad future, but they now work as water transporters. Some are connected to each other via golden pipes which lead water through the area. Some of these pipes even pour clean water into the lake. The star-shaped plants are as well shinier than before, with water dripping from them. The tree trunks still remain in this timeline. Like in the bad future, they are more damaged than in the present.

Having invaded Little Planet, which includes Palmtree Panic, Dr. Robotnik would install robot teleporters in the past and infest the region with Badniks. He would also put up some Metal Sonic Projectors to terrorize the Animals that live there. Using these elements, Robotnik managed to conquer the future of the planet and rewrite history in his own image. Due to the doctor's influence however, Palmtree Panic would end up being a victim of Robotnik's constant pollution on Little Planet. With lots of factories nearby surrounding it, water polluted by oil and chemicals, and mechanical plants, the region would be devastated in the future.

A while later, Palmtree Panic becomes the first location Sonic the Hedgehog visits during his adventure on Little Planet, during which he manages to re-write Palmtree Panic's history and revert Robotnik's effects in the region. Along the way, he meets Amy Rose for the first time, who falls in love with him instantly and tries to hug him. Not taking an interest in Amy's affection, Sonic continues onward. He also comes under attack by Robotnik in the EGG-HVC-001, but he manages to defeat Robotnik, forcing him to retreat, before continuing onward to Collision Chaos.

Palmtree Panic is a rather speedy level, taking numerous cues from Green Hill Zone from the original Sonic the Hedgehog, while also adding some new features. One of its most iconic level set pieces is a giant loop present at the start of the present of Zone 1, in which the playable character runs through in a pseudo-3d perspective before being launched into the actual level. Tunnels also return, but now feature many different formations that snake around and even loop in on themselves. There is one instance in Zone 1 where there is a gimmick that sends the player zooming through an unseen tunnel inside the foreground, before bursting out of a wall and leaving behind a hole in the shape of the playable character.

In terms of level design, Palmtree Panic is relatively fast and straightforward, though it often features multiple routes. The Round features very tall hills of varying height that Sonic can climb up from the main path, often using small hidden platforms to ascend, and are occasionally connected via crumbling platforms. The Road also features Spring Poles, as well as spinning turntables that rotate the player around when stood on.

Set pieces of note are the hidden platforms that are not only present in the exact same spots across all time zones, but also feature different properties depending on the time as well. Arguably the most iconic "obstacle" present in the level however is Amy Rose, who appears at the very end of Zone 1 and will follow Sonic around, trying to latch onto him. If she manages to catch Sonic, the player will be unable to move, though they can jump to escape.

Palmtree Panic Zone 1 is the first Zone in the game, and as such is the easiest. There are several speedy sections here that make use of Springs and tunnels, as well as several secrets that can only be accessed by entering the Time Warps.

In the present timeline, the Zone is notable for starting with a giant ramp-like loop, in which the playable character runs upwards in a pseudo-3D perspective. A similar gimmick is seen near the end of the Zone.

In the present, right before the Goal Plate, the player can find Amy Rose, trying to hug Sonic. However, Amy is not seen when playing as Tails in the 2011 remaster of the game.

Palmtree Panic Zone 2 is similar to the first Zone, except that it has more alternate pathways to take. The top pathways are the shortest and safest to take, though they lack Rings and secrets. The bottom pathways are more maze-like and feature more enemies, normally having more secrets than other pathways. Sometimes, they feature Springs that will take the player directly to the topmost pathways.

Palmtree Panic Zone 3 is the shortest Zone of the three, as it is where the player fights Dr. Robotnik in his EGG-HVC-001. As with other third Zones in Sonic the Hedgehog CD, this one takes place in the future. Before the fight against Robotnik, the player can collect many power-ups found in Item Boxes, such as Power Sneakers and Invincibility.

The boss of Palmtree Panic is the EGG-HVC-001, a mech used by Dr. Robotnik in Zone 3. This vehicle will walk from left and right on a plain terrain, moving its bumper arms to prevent the playable character from attacking it. To damage this machine, the player has to wait until it goes to the far right of the screen and "crouches", allowing them to hit it. This will make an arm fall down, making it weaker with every hit. When the player gets rid of both arms, they have to hit the vehicle once more to destroy it.

In the Sonic the Hedgehog manga published by Shogakukan, Palmtree Panic is known as the Palmtree World. In this media, it is a location on Little Planet.

In the Sonic the Hedgehog comic series and its spin-offs published by Archie Comics, Palmtree Panic is a Zone located on Little Planet. It was briefly visited by Sonic the Hedgehog while trying to free the planet from Dr. Eggman's rule.

In the Sonic the Comic comic series published by Fleetway Editions, Palmtree Panic is known as Palmtree Panic Zone. In this media, it is a Zone located on Miracle Planet. It was where Cam and Bert constructed some Badniks on the orders of Dr. Ivo Robotnik, only for the robots to be destroyed by the Green Hill Zone Badniks. However, the duo used the remains of the destroyed Badniks to create the Seven Badniks. 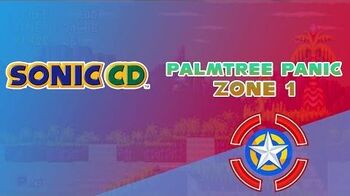 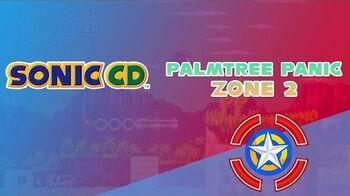 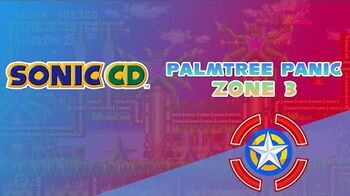 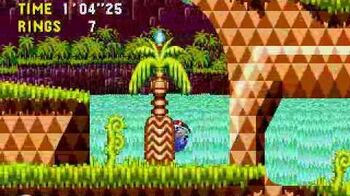