Pachacamac (パチャカマ, Pachakama?) is a character that appears in Sonic X. He was the chief of an ancient clan of echidnas from Sonic's world, and the father of Tikal. When Pachacamac launched an attack to steal the Chaos Emeralds, he and his warriors incurred the wrath of Chaos and were subsequently killed by the creature.

Pachacamac was an anthropomorphic echidna. He was fairly muscular for his age, with a broad torso and a thick tail. He also had a pointy muzzle with a sharp black nose, purple eyes, and dreadlock-like spikes hanging down the sides of his head. Much like his followers, he had stripes of tan war-paint on top of his head, around his dreadlocks, and around his forearms. Most noticeably, his muzzle was covered in a tan beard, and he had long and busy tan eyebrows.

Pachacamac's attire was very elaborate. He wore a flat golden necklace with feathers attached to it around his neck, and he had red and yellow arm bands adorned with feathers around his upper arms. Like the rest of his clan, he also wore white gloves with pointy knuckles. He also wore a waist cloth with rectangular lines and purple rims. This waist cloth was colored yellow, red, and pink, and had feathers ornaments attached on the lower rim. He also wore simple sandals.

Long ago, Pachacamac led his clan on a series of conquests by attacking other countries, where they committed acts like plundering and hurting the innocent.[1] Eventually, Paachacamac set his sights on acquiring the seven Chaos Emeralds at the Altar of the Emerald, believing they were the key to ensuring the Knuckles Clan's future prosperity and protection against enemy countries.[2][3] However, he faced opposition from his daughter Tikal, who had had enough of his warmongering ways. When Tikal tried to talk him out of his plans, Pachacamac insisted that the Emeralds were needed for the good of their people.[2]

Eventually, Pachacamac launched an attack on the Altar of the Emerald with his warriors, only for Tikal and the local Chao tos stand in the way. Pachacamac told Tikal that they needed the Emeralds for the clan's own welfare, but Tikal refused to him go through with it. Standing by the clan's choice and not interested in Tikal, Pachacamac ordered his warriors to storm the altar, trampling over Tikal and the Chao in the process. When Pachacamac reached the Chaos Emeralds however, Chaos appeared, furious at them for invading its sacred altar. Pachacamac was then enveloped in energy as Chaos used the Chaos Emeralds to transform into Perfect Chaos, and was seemingly vaporized along with his men.[3]

In the present day, Pachacamac had been all but nearly forgotten. However, his actions were still felt in the form of Chaos, whose rage endured the centuries. Eventually, Chaos was unleashed upon Earth when Dr. Eggman freed the creature, but Super Sonic managed to neutralize its anger.[3][6]

Pachacamac was shown to be a cruel, power-hungry and greedy warmonger, and would justify his acts of war by claiming that it was for the good of his clan. He held little fatherly love towards Tikal, willing to order his warriors to trample over her to get what he wanted. Before his death, Pachacamac was shocked to see Chaos before the Chaos Emeralds.

Pachacamac was a capable military commander as the Knuckles Clan conquered a number of countries under his leadership.[1] 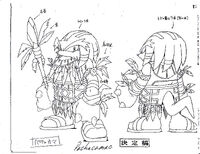 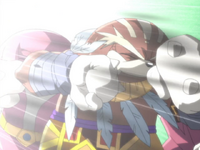