For other characters with the same or similar name, see Pachacamac (disambiguation).

Pachacamac (パチャカマ, Pachakama?) is a fictional character from the Sonic the Hedgehog series. He was an anthropomorphic echidna and father of Tikal, who served as the mystic chief and warlord of the Knuckles Clan 4,000 years ago. When Pachacamac rose to Chief of the Knuckles Clan, he led his people on series of wars to expand the clan's empire, eventually coming into conflict with the Nocturnus Clan.[2] To ensure his people's survival, Pachacamac orchestrated an attack on Altar of the Emeralds, but ended up invoking the wrath of Chaos who killed Pachacamac and nearly wiped out the Knuckles Clan.

Pachacamac's name is derived from that of a real-life Incan city-temple 40 km SE of Lima, Peru.[3]

Pachacamac was an anthropomorphic echidna. He was fairly muscular for his age, with a broad torso and a thick tail. He also had a pointy muzzle with a sharp black nose, purple eyes, and dreadlock-like spikes hanging down the sides of his head. Much like his followers, he had stripes of tan war-paint on top of his head and around his dreadlocks. Most noticeably, his muzzle was covered in a white beard, and he had long and busy white eyebrows.

Pachacamac was a part of a family of chiefs that lead the Knuckles Clan. At some point in his life, Pachacamac and his unnamed wife had a daughter who was named Tikal.[4]

While Pachacamac's mother, Grandma, lead the Knuckles Clan down a path of peace, Pachacamac yearned to expand their kingdom. When Grandma died, Pachacamac inherited her chieftain rank. No sooner, Pachacamac made his move and directed his people into a series of successful and swift conquests and wars against the neighboring countries, pillaging and killing everyone that came in his way. However, he was unable to take control of the nearby Altar of the Emeralds where the seven Chaos Emeralds and the Master Emerald resided, as a force protected the place. While Pachacamac had his ways supported by the majority of the Knuckles Clan, he found himself at odds with Tikal, who severely disapproved his acts of violence.[5]

When it seemed like the Knuckles Clan was doomed when the Nocturnus Clan attacked them with their prototype Gizoids, Pachacamac, supposedly out of desperation in the face of his clan's destruction at the hands of the Nocturnus Clan, sought to steal the seven Chaos Emeralds and the Master Emerald from their altar and use their power to destroy their enemies.[8] When Tikal learned of her father's plan, Pachacamac was confronted by his daughter, who tried to talk him out of his belligerent ways, but Pachacamac insisted that the Emeralds were essential to the Knuckles Clan's survival and continued victories.

Eventually, Pachacamac and men managed to lead a brutal attack on the Altar of the Emeralds, destroying much of the altar. When Pachacamac and his men went to steal the Emeralds, however, Tikal and the Chao tried to defend the altar by standing in their way. Pachacamac ordered Tikal to get out the way and told her that the Emeralds were needed to give their people total power, but Tikal pleaded him to stop. Refusing to listen to a child, Pachacamac ignored Tikal and ordered his warriors to charge, tramping over Tikal and injuring the Chao living there. This act enraged the Chao's guardian, Chaos, who appeared in front of Pachacamac when he got to the Emeralds, shocking him. Pachacamac was then killed by Chaos when the creature used the seven Chaos Emeralds to transform into Perfect Chaos, who then proceeded to wipe out almost all of the Knuckles Clan.

Pachacamac's last actions had severe repercussions. By attacking Chaos' home, Pachacamac caused Chaos to be corrupted by its own anger and sadness, turning it into a monster bend on destroying the world. To stop Chaos' rampage, Tikal sacrificed herself to seal Chaos in the Master Emerald, although not before Chaos had brought much of the Knuckles Clan's civilization to ruin. Those from the Knuckles Clan that survived Chaos' onslaught settled on Angel Island, an island that was created from the Mystic Ruins' land as a result of Chaos' sealing. The subsequent generations of echidnas from the Knuckles Clan then took up the duty of guarding the Master Emerald to prevent such a catastrophe from occurring again. Gradually though, the Knuckles Clan died out until only Knuckles the Echidna remained.

In the present day, Pachacamac had been all but nearly forgotten. However, his actions were still felt in the form of Chaos, whose rage endured the centuries. Eventually, Chaos was unleashed upon the world again when Dr. Eggman freed the creature, but Super Sonic managed to neutralize its anger.

Pachacamac was described as fearless, brave, and bold by the members of the Knuckles Clan.[9] However, he was also a cruel, power-hungry, and greedy warmonger with boundless ambitions, showing no qualms about killing and plundering other countries. While amoral in his actions, Pachacamac was highly protective and loyal towards his clan and viewed his people's well-being as a reason for justifying his cruel and ruthless actions.[10]

Regardless of his devotion to his clan, Pachacamac was a cold and distant individual whom held little love for his daughter Tikal,[11] as he was willing to order his warriors to trample over her to get what he wanted.

Pachacamac was said to have been very powerful by his followers.[12] Even Imperator Ix, whose arrogance is on a cosmic scale, acknowledged Pachacamac as a mighty foe.[13] His skills as a military tactician was also unquestionable as the Knuckles Clan conquered a number of countries under his leadership.

In the Sonic the Hedgehog comic series and its spin-offs published by Archie Comics, Pachacamac was the leader of the Knuckles Clan, a warrior caste of a group of Echidna colonist from Albion. They settled in Soumerca, where Pachacamac and the Knuckles Clan remained behind to fight a territorial war with the Felidae and the Nocturnus Clan. When the war was going against the Knuckles Clan, Pachacamac sought to harness the power of seven local Chaos Emeralds to win the war, but ended up incurring the wrath of Chaos and was subsequently killed by the creature.

In Sonic the Comic, Pachacamac was named "Pochacamac". In this media, Pochacamac was the ancient spiritual leader of the Ancient Echidnas who let his people against the Drakon Empire in a war to keep them from using the Chaos Emeralds to conquer the galaxy. Eventually, Pochacamac had a vision of Sonic the Hedgehog who would become the Drakon's sworn enemy in the future, so he and Tikal brought Sonic to their time to help them. However, when Chaos nearly killed Sonic, Pochacamac sent Sonic back to his own time to save his life.

In the anime series Sonic X, much like in the games, Pachacamac was an ancient warmongering chief of a tribe of echidnas and sought the Chaos Emeralds to seize power. Despite his daughter Tikal's attempts to change his mind, Pachacamac attacked the Emeralds' shrine with his men, only to incur the anger of Chaos who killed him when the creature transformed into Perfect Chaos. 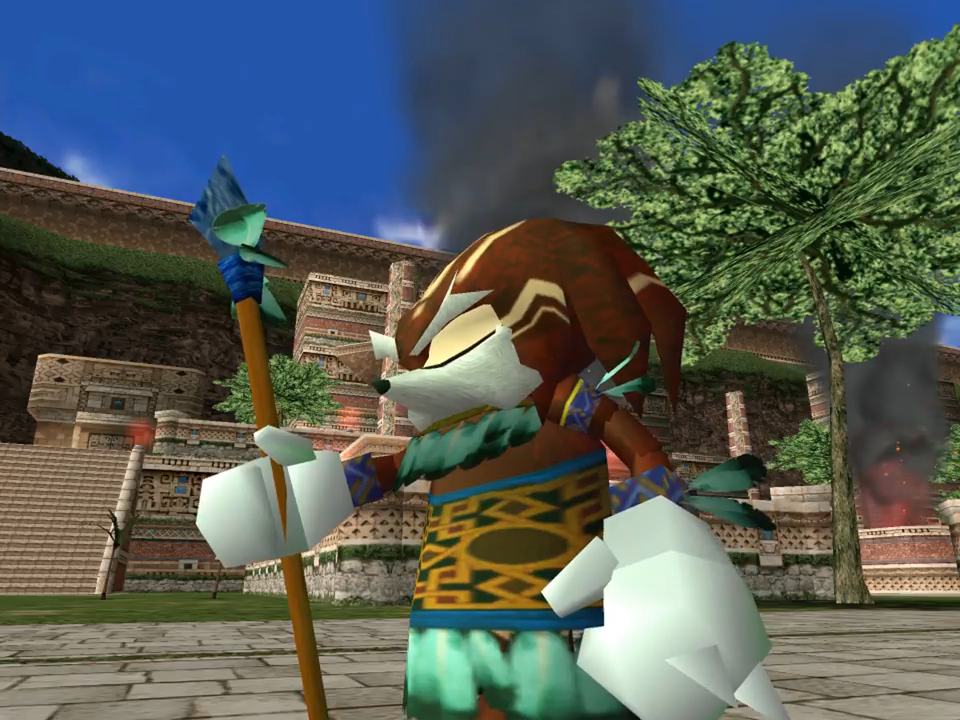 Pachacamac (left) in Sonic Chronicles: The Dark Brotherhood.
Add a photo to this gallery