Otto (オットー , Ottō?) is a character that appears in Sonic Unleashed. He is a human resident of Spagonia and the landlord of the student apartment building at Spagonia University, where he works as a teacher. He is also an old friend of Professor Pickle.

On the Wii/PlayStation 2 version of the game, Otto is one of the Gaia Temple guardians of Spagonia's Gaia Temple.

Over 80 years prior to Sonic Unleashed, Otto befriended Professor Pickle and they have since then remained good friends. Around this time, Otto became the dominator of Spagonia University and had since then taken care of it. While working at Spagonia University, Otto always focused on learning everything about his students and helped bringing many of his lovesick students together, some of them being Lilli's grandmother and grandfather. During his youth, Otto also had his own fair share of romances.

During the events of Sonic Unleashed, Otto met Sonic the Hedgehog and Chip when the pair came to Spagonia, and was pleased when he received their polite greeting. Otto then told Sonic and Chip of how much he appreciated it and told them about how he took pride in knowing everything about his students. He soon after met up with Sonic and Chip again, but was shocked to hear that Professor Pickle had been kidnapped by Dr. Eggman.

After Sonic, Chip and Tails had rescued Professor Pickle, Otto ran into Sonic and Chip and heard how they planned to restore the earth with a temple and an emerald. Otto responded to that by telling Sonic and Chip that he hoped they knew what they were doing, because he had no idea about it.

While Sonic and Chip restored Mazuri's continent, Otto eventually learned of Sonic and Chip's mission. From then on, whenever Sonic and Chip would pass through Spagonia, Otto would provide hints to where they would have to go next. Whenever Sonic questioned him of how he knew that, Otto explained that it is his duty as a dorm master to help young people.

Over time, Otto noticed that Dora was longing for a boyfriend. When Otto failed to encourage Dora to let go of her shyness, he assigned David, who was looking for a girlfriend to start a family with, to cheer Dora up, intending to make them a couple. His plan eventually proved a success.

During the events of Sonic Unleashed, Otto met Sonic the Werehog and Chip when the pair returned from restoring Mazuri's continent. Upon seeing Sonic's Werehog form, Otto became rather shocked and confused, but then quickly saw that it was Sonic. He then told him that he should not scare him like that as he could him a heart attack. Later, as Sonic and Chip was looking for directions to the local Sacred Shrine, Otto told them that he could recall there was a shrine somewhere, but he could not remember where, and noted that he had become rather forgetful lately.

Some time later, Otto meets with Sonic and Chip again. He noticed that they had gotten the Moon Tablet from Lucia and was surprised to hear that they had already passed through the Gaia Gate. When he heard this, Otto started to think that Sonic and Chip were worthy enough to enter the temple. Convinced, Otto willingly gave them the Sun Tablet to allow them to proceed through the Gaia Gate, and explained to them his and Lucia's role as Temple Guardians. Afterwards, Otto encouraged Sonic and Chip to find the Gaia Temple and stop Dark Gaia for good.

Otto knows practically everything about his students and takes great pride in that. Due to his extensive knowledge on his students, he has an uncanny knack for bringing the right students together as a couple. Sometimes though, all the love in the air leaves Otto a bit choked up about his own youthful romances.

In the Sonic the Hedgehog comic series and its spin-offs published by Archie Comics, Otto is a human resident from Spagonia and a Guardian of one of the Gaia Keys. During the Shattered World Crisis, he would lent his Gaia Key to the Freedom Fighters to help them fix the planet and provide them with further information. 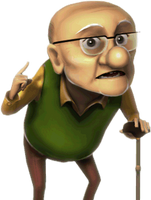