An Orca, from Sonic Runners.

Orcas (commonly referred to as killer whales[1]) are creatures that appear in the Sonic the Hedgehog series. They are large, non-anthropomorphic, aquatic mammals that populate the seas and coastal parts around earth. They are known for being infamous nuisances to Sonic the Hedgehog, whom they have pursued on different occasions.

In Tails Adventure, several orcas can be seen swimming in the waters around Cocoa Island on the map screen. However, said orcas serve a purely visual purpose, and have no effect on gameplay.

In Sonic Adventure and Sonic Adventure DX: Director's Cut, a single orca appears in Sonic's version of Emerald Coast. When Sonic enters a wooden jetty in this Action Stage, the orca will jump out of the water nearby and create waves that will rock the jetty. Soon after that, the player will enter a section where they are forced to run down the jetty while the orca chases after Sonic from behind, destroying the jetty as it closes in on Sonic. If the player slows down or stops, the orca will destroy the part of the jetty that Sonic is standing on, causing him to fall into the deep sea. Once the player leaves the jetty however, the orca will give up its pursuit and return to the sea.

In Sonic Heroes, two orcas appear at Seaside Hill where they can be seen jumping over the road just beyond the third island. They are smaller than the one in Sonic Adventure and serve only as background visuals.

In Sonic the Hedgehog (2006), an orca appears in Wave Ocean. Here, it will attack Sonic again. It first appears to chase after Sonic when he is forced to slide across the water. When Sonic then arrives on a wooden pier, the orca will continue chasing after him, destroying the pier as it closes in on him. If the player stops or slows down here, the orca will destroy the pier Sonic is standing on, causing him to fall into the deep sea. Should the player make it to the end of the pier though, Sonic will jump onto the orca and hold onto its dorsal fin while it swims around and plows through obstacles. Eventually, the orca will take Sonic to a different section of the area. There, Tails will close a steel gate, allowing Sonic to separate himself from the orca as it escapes underwater.

In Sonic & Sega All-Stars Racing, an orca can be seen along the Whale Lagoon race track. Serving merely as a background visual, this orca will jumps from one water pool to another, performing stunts in the air as it jumps.

In Sonic & All-Stars Racing Transformed, orcas can be seen in Ocean View where they will do flips above the track to get to the ocean. However, they cannot interact with the track or the playable characters.

In the console/PC version and Nintendo 3DS version of Sonic Generations, the orcas make a return appearance.

In the console/PC version of Sonic Generations, the orcas appear in both Acts of Seaside Hill where they sometimes help the player. They can also been seen in White Space, just behind Seaside Hill's Stage Entrance. In Seaside Hill Act 1, when Classic Sonic is shot from a Cannon or jumps off a Jump Panel and starts to fall into the sea, an orca will emerge and knock Classic Sonic upward, allowing him to get across the water. Meanwhile, in Seaside Hill Act 2, the orcas can sometimes be seen jumping out of the water and doing stunts in midair when they see Modern Sonic come running. However, they cannot interact with him in these instances. Towards the end of the Act however, the orcas will help Sonic get across the sea when he gets launched off a Jump Panel.

In the Nintendo 3DS version of Sonic Generations, an orca appears in both Acts of Emerald Coast. Here, the orca is once again chasing Sonic (Classic Sonic in 2.5D and Modern Sonic in 3D). In Emerald Coast Act 1, the orca appears halfway through the Act, where it will chase Classic Sonic across a wooden bridge, destroying it as it closes in on him. Sonic must run and jump across the bridge it to avoid getting eaten or falling in the water. In Emerald Coast Act 2 on the other hand, the orca is more aggressive. At the end of Act 2, it jumps out of the water in a last attempt to eat Sonic. When this happens, the player must press

as much as the screen prompts them to do when Modern Sonic jumps in order to avoid the orca's bites and finally reach a platform where the orca bangs its head and falls back into the water.

In Sonic Dash, the orcas appear again as background decorations. In this game, they appear in coastal-themed Zones where they can be seen jumping from one side of the sea to the other.

In Sonic Runners, the Orca appears as a Rare Speed Type Buddy which destroys platforms and increases Ring appearances for every 200 (100 same Type) combos.

In Team Sonic Racing, an orca appears in the backgrounds of Ice Mountain, Ocean View and Whale Lagoon. Compared to other games, the orca is twice the standard size. On each of these routes, they jump out of the water and fly over the race tracks, after which they land in another water reservoir.

In Sonic Racing, an orca appears in the background of a certain section in Forgotten Temple.

In the Archie Comics published Sonic the Hedgehog and Mega Man comic crossover event, Worlds Collide, Sonic, Mega Man, Proto Man, Tails and Rush venture through the Skull Egg Zone. When walking over a boardwalk, Sonic references his past encounters with orcas by saying "If we get jumped by a whale out here, I swear..."

The comics also feature Akhlut, a cyborg orca who serves Dr. Eggman as an underling. The original version was leader of the Northern Tundra Dark Egg Legion, which was composed entirely of cyborg orcas, while the Post-Super Genesis Wave reality featured Akhlut as leader of an Egg Army unit in the Great Blue Realm. Unlike the game orcas, Akhlut is capable of speech. 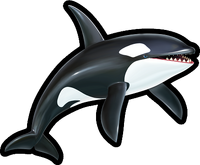 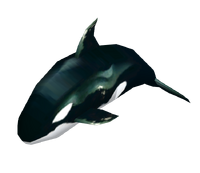