This article is about the enemies with spiked balls for defenses. You could be looking for Orbot.

Orbinaut is a metal ball ringed by four spiked balls that it throws at its prey. This is its only method of attack, and also its greatest weakness, as once all four spiked balls have been thrown, Orbinaut is completely defenseless. It's most likely based off a sea urchin. Orbinaut also appeared in the comic adaptations of the games.

The Orbinauts return as one of Sonic's most challenging Badniks! Pay close attention, you only have a split second to defeat them.

Unidus (ウニダス)[1] is a blue variety of Orbinaut that becomes red when a enemy is spotted and sends the four spiked balls around it forward to attack. It appears in the Labyrinth Zone from Sonic the Hedgehog. In North America Unidus is named Orbinaut in Sonic the Hedgehog and Spiky Spinner (see below) in Sonic Adventure.

{C}Star Pointer[3] (Icedus アイスダス) appears in the Ice Cap Zone from Sonic the Hedgehog 3 and has four spiked ice balls around it. It sends the spiked balls forward to attack. Unlike projectiles from other variants of the Orbinaut, the ice balls will be destroyed with no ill effects to the controlled character if they have any shield or hitting contact with Knuckles' knuckles.

Orbinaut[3] (Pola ポーラ) is a metallic gray variety and appears in the Launch Base Zone from Sonic the Hedgehog 3 . It keeps the four spiked balls around it for defense, and only move when the player also move. It can only be defeated while the player is invincible or with a well-timed Insta-shield move by Sonic (or when Sonic takes a hit, he has a quick moment to hit it when he's flashing). Though the latter is hard to pull off, it is possible with correct timing.

Spiky Spinner, known as Unidus (ウニダス)[4] in Japan and in his Sonic Rivals 2 card is a variety from Sonic Adventure.

Flamer (ポーラ) is new, different kind of Orbinaut from Sonic the Hedgehog 4: Episode II. Flamers are yellow and have spinning flamethrowers. Flamers can be found in Oil Desert Zone and can temporarily ignite fire of oily landscape.

A new series of Sea Urchin type robots which were developed based on the "Orbinauts" & "Spike Spinners" featured in Episode I. The blasting flames of the burners are certainly dangerous, but those fires will spread widely in oily places. Take extra care. 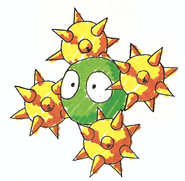 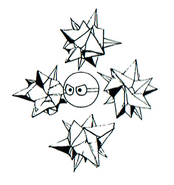 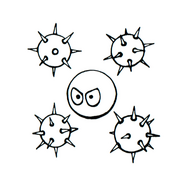 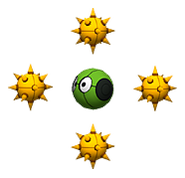 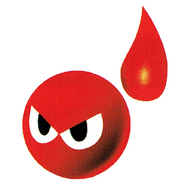 Sonic the Hedgehog 4
Add a photo to this gallery

Sonic the Hedgehog 4: Episode II
Add a photo to this gallery

Retrieved from "https://sonic.fandom.com/wiki/Orbinaut?oldid=721349"
Community content is available under CC-BY-SA unless otherwise noted.