Temporarily banishes the Eyes of Solaris and stabilizes time-space rifts.

An ornate sculpture of a regal bird on top of a mysterious orb.

If you touch this rock, you can slow the time-space rift just slightly.

The orb statue[1] is a gimmick that appears in Sonic the Hedgehog (2006). It is a a mystical statue that appears exclusively in the Action Stage End of the World where it is used to temporarily remove the Eyes of Solaris.

The orb statue is a presented as a mystical bust. It has a large green orb on the bottom and has an equally large eagle ornament made of rock on top of it with its wings spread out. These statues have the ability to stabilize the fabric of reality by reducing Solaris' ability to alter it.[1] 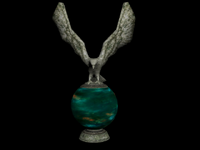 The orb statue.
Add a photo to this gallery

When the orb otatue is touched.