Opal is a character that appears in the Sonic the Hedgehog comic series and its spin-offs published by Archie Comics. She is a mobian jellyfish and a member of the Pirates of the Setting Dawn.

Opal is an average sized mobian jellyfish, roughly around the height of Espio the Chameleon, with a pear-shaped figure. She has yellow skin, dark grey eyes and a gelatinous umbrella-shaped bell head with tentacles drooping from the sides. Two stingers are hidden among these tentacles. She sports a black sundress with a skull emblem on both sides of her hips. She also wears two differently colored bangles; black bangles on both wrists and gold bangles with small blue beads on both her wrists and ankles.

The Pirates of the Setting Dawn would come to recognize Princess Undina, which prompted them to kidnap her. During this time, Opal stole most of Undina's jewellery. However, after Undina proved her worth by translating old sea charts that Abyss the Squid left behind, Opal would return the princess' jewellery.[1][2]

Opal and her crew found an Amphibious Vehicle lurking around and they brought aboard their ship. They are met face-to-face with Echo the Dolphin, Razor the Shark, Crusher the Chao and the Chaotix. After a fight broke out, which Opal did not find cool, Razor requests to rejoin and the Chaotix ask to join as well, to which Captain Shellbreaker allowed. After Echo was taken to the brig, Opal and Mr. Bristles get acquainted with Espio the Chameleon and Charmy Bee. Later on, Opal makes the crew supper along with Charmy, stating her distaste for cereal with raisins in it.[1]

Opal is a very calm but lazy person that is easily amused. She finds fun in giving others a hard time and giving them embarrassing nicknames. She seems to be quite nosy, as she wanted to eavesdrop on Razor and Blade's conversation.[1] 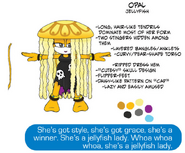 Retrieved from "https://sonic.fandom.com/wiki/Opal_(Archie)?oldid=2178802"
Community content is available under CC-BY-SA unless otherwise noted.