Opa-Opa is a fictional character and the protagonist of the Fantasy Zone series. He is an anthropomorphic spaceship, a defender of his planet, and a protector of innocence. In the distant future, Opa-Opa goes out on on a mission to save his father, O-Papa. During his journeys, he encounters strange but yet unique creatures and machinery, and is forced to overcome the most difficult of foes.

Before Alex Kidd and Sonic the Hedgehog, Opa-Opa served as Sega's primary mascot through most of the 1980's. Fantasy Zone remained a successful game for some time, but was eventually overshadowed by the Alex Kidd series in order to compete against Nintendo's rising mascot.

Opa-Opa is a spaceship-like being with red, blue, and yellow colors. Sometimes, he summons white wings when he needs to take flight, or if he just feels like it. His appearance is similar to that of a futuristic spacecraft - with the blue "window" and pod-like body. He also has a pair of small, yellow feet and legs. Much like the opposite of his white wings, he will summon them when he is on the ground.

In Sonic Riders, Opa-Opa makes a cameo appearance as a board-type Extreme Gear, named Opa Opa. When using the Opa Opa during a race, the level of its rider will always be at Level 3. This is signified by the playable character's attack method having been changed to dropping a large anvil on top of the opponent instead of the character's usual level 3 attack.

In Sega Superstars Tennis, Opa-Opa makes no physical appearance. However, his in-game sounds and "voice" can be heard during both the Space Harrier and ChuChu Rocket! minigames.

In Sonic & Sega All-Stars Racing, Opa-Opa appears as a playable character. He can be unlocked by purchasing him for 32,000 SEGA Miles in the SEGA Shop.

In gameplay, Opa-Opa does not drive a vehicle, as he is already is a vehicle. He is able to use his white wings to hover, or fly, around the track. Opa-Opa has as well three different types of selectable types of effects to choose from when using his All-Star Move, "Fantasy Thorn". Each type of All-Star Move is unnamed but represents abilities and moves that can be purchased from the Parts Shop in Fantasy Zone. These effects include a rocket booster, a big missile, and four smaller missiles. Using the rocket booster allows Opa-Opa to increase his speed and knock away any opponents that he touches; using the big missile allows him to home in on other racers; and the four small missiles allow Opa-Opa to attack multiple opponents at once. The theme song that plays during his All-Star Move is "Don't Stop" - from Super Fantasy Zone.

In Sonic & All-Stars Racing Transformed, Opa-Opa appears as a cameo character. In this game, he appears on the Sticker "Eyes on the Road" which depicts the artwork of Opa-Opa from Sonic & Sega All-Stars Racing. He also appears as a holographic statue on the Race of AGES racetrack during the optional boat mode area.

In Sega Splash Golf, Opa-Opa appears as one of the many selectable coaches or caddies in. He is as well the only independent character from Fantasy Zone to make an appearance.

In Sonic's Ultimate Genesis Collection, Opa-Opa appears in his main game, Fantasy Zone. His game, however, is an extra feature and can only be unlocked after collecting 80,000 points in Flicky.

In Sonic Runners, Opa-Opa appears as a S Rare Speed Type Buddy. In this game, he could only be unlocked during the special Fantasy Zone and Sonic Runners collaboration event. In gameplay, his Buddy will bank a certain number of Rings for every "X" Combo.

In SEGA Heroes, Opa-Opa appears as a cameo character. One of the enemy’s named abilities references his debut video game ability, Fantasy Zone.

Unlike that of an actual spaceship, Opa-Opa has free-will and appears to be a carefree being with nothing much to lose. He cares much for his family and is willing to risk his carefree life to save his father from the dangers of his planet. As a mute, Opa-Opa is often seen as cheerful, sympathetic, and loyal to those he has close relations with. 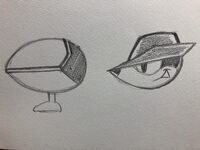 Fang's concept next to a sketch of Opa-Opa. 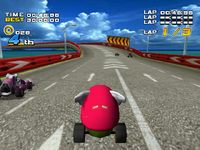