A launcher that shoots Omochao-like projectiles.

The Omochao Gun makes an appearance in the Sonic the Hedgehog comic series and its spin-offs published by Archie Comics. In this media, it is one of the weapons for the Freedom Fighters' Sky Patrol, though it shoots full-fledged copies of Omochao. It was first deployed to destroy the War Walrus when it was send to destroy the Sky Patrol. 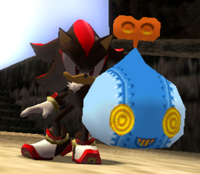 Shadow with the Omochao Gun