This Extreme Gear first appeared in Sonic Riders as a Bike type Extreme Gear named "Omnipotence". According to its profile, it grants its rider all skills. It is unlocked in the game by completing the Heroes Story in Story Mode, and can then be purchased at the shop for 5,000 Rings.

The appearance of the Omnipotence in Sonic Riders is actually closer in resemblance to that of a bumper car than a bike. Its design is also very similar to the Destroyer's, possessing a drill on the front and extended blue exhaust ports on each side, with multicolored glowing stripes on the rear. It is also primarily colored white, with gray footing panels and a blue seat and rims.

As a Bike-type Extreme Gear in Sonic Riders, the Omnipotence is more powerful, but less maneuverable and less fuel-efficient than most other types of Extreme Gears. It is well-balanced across its attributes, but with less than average stats.

When in use, the Omnipotence grants its riders Speed Type, Flight Type and Power Type attributes, allowing the player to grind on rails, use Air Riding, and smash through obstacles (even though the user already possesses one of these abilities) at all times. Its drawback, however, is that the player cannot replenish the Omnipotence's Air Tank by using either any of the three types' abilities.

The Omnipotence returned in Sonic Riders: Zero Gravity, where is was given a new name, "Omnitempus" and had been redesigned to be a Board type Extreme Gear. According to its profile, it is a balanced Extreme Gear that can use all basic skills and that timing is the key to mastering it. It can be purchased at the shop for 2,800 Rings.

In Sonic Riders: Zero Gravity, the Omnitempus is given a major redesign. In this game, the Omnitempus' basic structure resembles a cyan and metallic-blue rounded cuboid with yellow streaks on the sides, with a darker metallic-blue area on the top surface and rear. It also possess two silver-colored foot panels on the top surface and two sphere-like exhaust ports with disks on the corners of the rear. However, it still maintains the multicolored lines on its rear from the previous game.

As a Board type Extreme Gear in Sonic Riders: Zero Gravity, the Omnitempus is well-balanced in its attributes with average statistics and is suited for general riding.

In this game, like in Sonic Riders, the Omnitempus allows the player to smash obstacles/barricades, grind and Air Ride, except that these abilities can only be used through the Omnitempus' Gear Parts. As such, the player can only use one ability at once, has to pay Rings to use them, and cannot switch between the abilities once one has been chosen. Also, a drawback of this Gear is that it gains less Gravity Points from performing any of the three aforementioned abilities, performing tricks and accessing Wall Routes compared to most other Gears.

The Omnitempus returned again in Sonic Free Riders, where it retained its name and Extreme Gear type in Sonic Riders: Zero Gravity. According to its profile, its an all-powerful Extreme Gear model that has the Grind, Air Ride, and Power skills. It can be purchased from the shop for 1,500 Rings.

In Sonic Free Riders, the Omnitempus was given a new redesign. In this game, it had a more board-like shape with cloud-shaped white accents on the edges, while the rest of its surface was colored blue, with yellow and light blue stripes and two gray circles on the top surface.

As a Board type Extreme Gear in Sonic Free Riders, the Omnitempus is, like in Sonic Riders: Zero Gravity, well-balanced in its attributes though with less-than-average stats and is suited for general riding. In this game, the Omnitempus was given the same abilities as it had in Sonic Riders, meaning that the player can grind, air ride through Dash Rings and smash through obstacles at all times. However, it also regains its drawback of preventing the player from refilling the Omnitempus' Air Tank by using either of the three abilities and any Air earned from performing Trick Actions is halved. Also, it cannot be equipped with any Gear Parts.

In the Sonic the Hedgehog comic book series and its spin-offs published by IDW Publishing, the Omnitempus appears as an Extreme Gear used by Mimic. In this media, it sports its design from Sonic Riders. 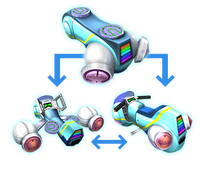 A diagram of the Omnitempus transforming into an Air Ride type and/or a Bike type in Sonic Riders: Zero Gravity.