The Zone is a massive oil refinery pumping up crude oil that pollutes the ocean. As with most other Zones in Sonic Mania and Sonic Mania Plus, Oil Ocean Zone is composed of two Acts, with a boss fight at the end of both.

The dry plains of the Mirage Saloon Zone apparently lead out to the sea, for Sonic, Tails and Knuckles now find themselves scaling slimy oil refineries off the coast of West Side Island. Like the original, the Oil Ocean Zone is an industrial area for extracting and processing oil. The entire region is a sea that has been blanketed by oil, and is being overcast by an orange sky with a lit horizon. Only some clouds and the obscured sun can be seen in the sky. The areas with solid footing consist exclusively of a network of metallic oil platforms and factories emblazoned with the Eggman Empire's decal, most of which are disposing oil into the sea. Along the roads are sections in purple and green with strange-looking ornaments.

After defeating the Meter Droid, the entire Zone goes up in flames and the region becomes darker: the sky turns dark red, the oil pools become more frequent and the oil platforms' structures become more like buildings.

After literally shooting themselves to Oil Ocean Zone, Sonic, Tails, and Knuckles find themselves once again in search of Dr. Eggman to stop him from abusing the Phantom Ruby. Making their way to the most polluted region of the Zone, the trio overcomes another one of Eggman's attempts to crush them, this time with the Mega Octus. Afterward, the trio steps out on a submarine which suddenly takes to the skies, with a course set for Lava Reef Zone.

Arriving in Oil Ocean Zone after sending themselves flying towards the Zone from Mirage Saloon Zone, Sonic, Tails, Knuckles, Mighty and Ray resume their quest to retrieve the Phantom Ruby from Dr. Eggman. Eventually, the group of heroes makes their way to the end of Oil Ocean Zone, only to come under attack from Eggman and his Mega Octus. After defeating the doctor and his contraption, Sonic and co. get on a submarine. Much to their surprise though, the submarine suddenly starts flying towards Lava Reef Zone.

When standing in the oil pools in this Zone, the playable characters will slowly sink into them; stay in them for too long without jumping and they will lose a life. The oil pools can as well be set ablaze by fire-based objects, like the Fire Shield or a Gohla's fireballs. This will create a field of fire that can damage the player should they touch it without protection, although the fire will go out after a few seconds. Some edges also have yellow outcrops that crumble a second after the player touches them. There are also oil falls in the foreground that the player can climb by entering them and then continuing to jump inside them.

Among the gimmicks in this Zone are elevators that can take the player up or down, and oil slides that the player will ride automatically once they touch them. There are also green flame-propelled gas-burn platforms that get catapulted into the air periodically, which the player can hitch a ride on. Some green pipes have as well as spikes that slide along them.

A recurring effect in the second Act of this Zone is that the screen will gradually turn more and more smoky as time passes, making it harder to see enemies or obstacles, and navigate the surroundings. Should the air become too smoggy, the player character will begin to lose Rings gradually (similar to a Super State). To clear up the air, the player must grab and pull chain Switches that hang from the ceiling. However, this effect is only temporary. The second Act also features springs that must be pushed back by the playable characters before they can launch them forward.

The second Act features submarines that act as mini-levels within the course of the Act. Entering one will require the player character to complete a brief platforming section within before exiting into a different part of the main Act.

Like in the original Oil Ocean Zone, this Zone features networks of Cannons that throw the player back and forth around the Zone, and fans that can blow the playable characters away or take them through the air.

Act 1 is almost identical to both acts of the original Oil Ocean Zone in Sonic the Hedgehog 2, albeit much longer. One big difference is the presence of the Fire Shield, which will force the local oil to combust. Beating the boss of this Act will set the entire Zone on fire, bringing the player to Act 2.

The entire Zone is set aflame during Act 2. In Act 2, the player must keep pulling pulleys under a time limit to prevent the Zone from filling up with deadly gas. This Act also features prominent use of submarines, which will take the player into the oil (and as a result pausing the gas effect). The players must navigate these small submarines in order to find the exit which will launch them to further parts of the Act.

The boss of Oil Ocean Zone Act 1 is the Meter Droid, a floating utility robot with a large spanner. This robot will fly back and forth and toss its spanner before eventually going into the background and turning a release valve in an attempt to launch the playable characters into the spike-lined ceiling. The boss can only be damaged when it is in the foreground. After six hits, it will be defeated.

The boss of Oil Ocean Zone Act 2 is the Mega Octus, a large submarine shaped like an Octus piloted by Dr. Eggman. The machine's main methods of attack include submerging two of the three available platforms (forcing the character to jump to the third platform or descend into the oil), summoning bullet shooter tentacles, deploying a snake-like object that flies at the player, and firing a laser cannon. Hit the Mega Octus eight times to end the battle (destroying the bullet shooters can be done too but it does not contribute to the victory condition of the battle). It should be noted that upon reaching this part of the Act, the Ring-draining smoke effect will not be present for the remainder of the Act. 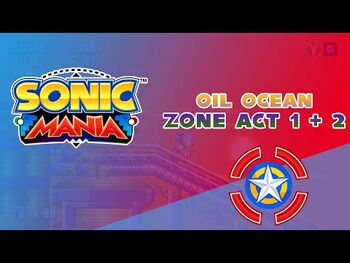