Sonic and Tails in Oil Ocean Zone, from the 2013 remaster of Sonic the Hedgehog 2.

Robotnik's refineries are pumping at full steam. Crude oil has turned the ocean black! Can Sonic keep his footing on the slippery catwalks and bursting steam vents?

Oil Ocean Zone is a refinery owned by Dr. Robotnik on West Side Island. The background features various brown buildings underneath an orange sky with a few clouds and a white sun with an effect that causes it to "wiggle" from side to side. The platforms here are purple and yellow, with green and yellow silo-looking structures. The bottom of Oil Ocean Zone is flooded with oil that has polluted the ocean.

During his takeover of West Side Island, Dr. Robotnik took control of Oil Ocean Zone, polluting the nearby regions and filling the Zone with Badniks.

Oil Ocean Zone soon after became either the seventh or eighth Zone that Sonic and Tails would travel through to put a stop to Robotnik's operations. On their journey through the Zone, they eventually locate the doctor in the Eggmarine, which they have a battle against. After his vehicle is defeated, Robotnik flees, while Sonic and Tails head to Metropolis Zone.

The oil does afford Sonic a means of survival should he fall off the level. While the hedgehog cannot swim in water, the gloopy hydrocarbons mean the player will not sink as long as they keep jumping. Often, floating fans will provide a means to get back to solid ground.

In addition, the Zone hosts strange Cannons, which throw Sonic back and forth around the Zone. Flame-propelled gas-burn platforms also provide a means by which to gain altitude (and access secret monitors on occasion).

The Act opens up with a simple road with two disintegrating platforms and fans below that help the playable character back up if they fall down from the platform. Immediately after the second platform is a step with a reverse yellow Spring, an Octus, and a set of spikes. The player will then encounter two Aquis before coming across an elevator. Below the platform for this elevator is a Super Ring and Shield monitor, with an upward-aligned yellow spring alongside them. Also, over the next step are four flame-launching platforms. Two of them are self-controlled and cannot crush the playable character, but they can launch the player up to different areas of the Act.

The boss of Oil Ocean Zone is the Eggmarine, an oil-faring submarine that deploys a variety of weapons, including a spiked harpoon and periscopic laser cannon. It is damaged by attacking the cockpit while it resurfaces.

In the Sonic the Comic comic series and its spin-offs published by Fleetway Editions, the Oil Ocean Zone is one of the many Zones on Planet Mobius. Over the series' run, Sonic and Tails came to this Zone twice to stop hazards to the environment that it was on the verge of unleashing, and in both cases Sonic was transformed into the psychotic Super Sonic. 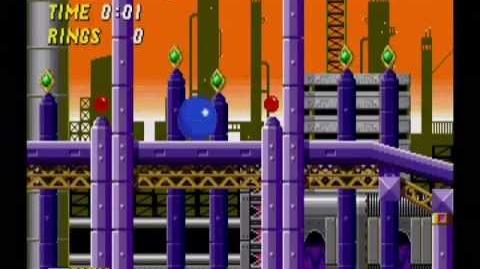