For other uses, see Octus (disambiguation).

An Octus, from the Wii U version of Sonic Lost World.

The Octus[1] (オクター[2], Octar?) is an enemy that appears in the Sonic the Hedgehog series. It is a mass-produced, octopus-based Badnik created by Dr. Eggman that can float in the air and shoot energy projectiles from its small snout.

Octuses are based on the octopus. They have pink round heads with black eyes, small corkscrews ears on each side of their heads and a tiny snout each. Their most noticeable feature are their six mechanical tentacles on their lower body which they can use as a propeller. These tentacles have small suction cups on their ends. Also, their lower body, where their tentacles connect, are yellow on the middle section and blue on the bottom. In Sonic Lost World, the Octuses received eyelashes and cyan eyes, as well as no suction cups on their tentacles.

The first appearance of this Badnik was in Sonic the Hedgehog 2 (16-bit), where it served as an enemy. This time around, this Badnik is referred to as Octus[1] (オクター[2], Octar?). In this game, the player encounters them in Oil Ocean Zone.

In gameplay, Ocutuses appear sitting on the ground motionless (with an angry stare no less), mostly at stair sections. In these areas, there can be up to two Octuses in one area. When seeing the player however, the Octuses will start hovering up in the air by spinning their tentacles and then shoot one, small energy projectile in a straight line ahead. They will then land in the same place as before to repeat their attack pattern after a while. The player has to avoid the Octuses' projectile while moving forward. Other than that, the player can destroy these Badniks with either a Spin Jump or Spin Dash. Also, upon their destruction, they release an Animal.

In Sonic Free Riders, the Octus makes a cameo appearance in the form of two different Action Items which can be obtained from Item boxes: Octo-Ink and Octo-Boost. Each item resembles a minature version of the Octus, but with a button on top. In gameplay, the Octo-Ink can obscure opponent's view with ink, and the Octo-Boost can provide the user with a brief speed boost.

In the Wii U version and PC version of Sonic Lost World, the Octuses serve again as enemies. During the game, all of Eggman's Badniks, including the Octuses, got hijacked by the Deadly Six. In this game, the Octuses mostly retained their original design from Sonic the Hedgehog 2 (16-bit).

In Tropical Coast Zone 4, lone Octuses can be found sneaking on water surfaces. In Frozen Factory Zone 4, some Octuses will float up from oil pools inside the factory section and fire projectiles. Finally, in Silent Forest Zone 3, Octuses will skate with their tentacles towards the player while firing projectiles.

In Wii U version of Mario & Sonic at the Rio 2016 Olympic Games, the Octuses appear as hazards. In this game, they retain their design from Sonic Lost World.

In gameplay, two Octuses serve as hazards in the Duel Beach Volleyball event. During this event, a plaform with two Octuses sitting on it will occasionally move in-between the fences in the center of the field. From there, the Octuses will spit out projectiles upwards or towards players. These projectiles can stun the playable characters (as well decreasing their duel points by twenty points) or change the flight direction of the volleyball.

Octuses are capable of flight and can shoot small, yellow energy projectile from their small snout.

In the Adventures of Sonic the Hedgehog television series, an Octus appeared briefly in "Untouchable Sonic" where it and other Badniks chased after Sonic underwater, only to be caught in some seaweed.

In the Sonic the Comic series published by Fleetway Editions, the Octus are a part of Dr. Robotnik's Badnik army. However, they only made a few brief appearances during the series' run.

In the Sonic the Hedgehog comic series and its spin-offs published by Archie Comics, the Octus was a part of Dr. Robotnik's Badnik Horde and among the doctor's Classic Badniks. It made a brief appearance during the Robotropolis Olympic Games where it competed against the Knothole Freedom Fighters.

In the Sonic the Hedgehog comic series and its spin-offs published by IDW Publishing, the Octuses are Badniks from another dimension set in the recent past, where they were created by Dr. Eggman. 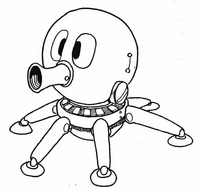