Tails in Ocean Base.

A secret base underwater

Ocean Base (オーシャンベース, Ōshanbēsu?) is the third Zone in Sonic Advance 3. It is a secret base located on the seabed[1] and one of the parts of the Earth that Dr. Eggman created when he broke the planet apart with Chaos Control.

Ocean Base is an industrial, underwater facility located somewhere deep under the ocean.

After dealing with Eggman and Gemerl in the previous Zone, the heroes advance to the next Zone, Ocean Base.

The first two Acts are rather vertical stages that can get confusing if the player intends to rush through the Zone blindly. All three Acts in the Zone feature polluted water and waterfalls that work similarly to the sand falls of Sandopolis Zone that Sonic and his friends can repeatedly jump to climb up the waterfall to get to higher areas. Despite the presence of water, the player does not have to spend much time in it due to the vertical nature of the Zone.

Other obstacles include giant crushers (some of which will sprout spikes a short while after the player land upon them), spike pits and water slides. Uutsubos that pop out of walls and spike pits. Gimmicks here include giant fan propellers that slowly rise as the player jump upon them (similar in appearance to a smaller gimmick in Sky Canyon of Sonic Advance 2), cannons that fire directly upwards, Conveyor Belts, high-speed warp tubes and rails that sometimes offer an alternative path to underwater routes.

Plenty of slopes and rails are present for climbing here in the Act. Despite various shortcuts, this Act is quite straightforward, with an occasional gimmick and Badnik. Certain Tag Actions may offer various shortcuts in this Act.

A giant waterfall at the start is needed to climb to advance. This is where the underwater segments come into play, though most, if not all, can be avoided by various pathways.

Players should be cautious of the moving blocks near the start of the Act. There is an absolute mandated water section near the end, albeit on a minor scale. A final run above water leads straight to the goal.

The boss of this zone is called the Egg Foot, which is similar to the Egg Frog in Sonic Advance 2, only this machine has much more powerful legs and there are no gravity changes. The battle begins with Dr. Eggman and Gemerl jumping down from a height beside the chosen character and his/her partner. Eggman will laugh, and the battle will begin.

Eggman has two attacks as this boss: The first is to jump high into the air and stay there, and then to move left and right across the arena, slowly at first, but faster with every hit. When he does this, all that will be visible of the machine are its legs. You must follow Eggman around and stay between Egg Foot's legs. When Eggman stops hovering and comes back down, if you are between the legs, jump up and hit him.

In his second attack he will jump up, as normal, but keep a good eye on the bottom of Egg Foot's legs: there are two energy generators, each inside a "foot" on the bottom of each leg. Just before Eggman comes down, he will turn the "feet" in, stopping you from staying beneath him to strike him. Quickly spin dash away and be prepared to jump as the generators in the "feet" send out a surprise energy attack down both sides of the ground of the arena ( very much like the original Egg Frog's energy attack). If however, you do lose your rings, make the most of it and hit Eggman back. 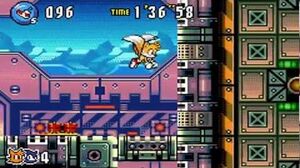 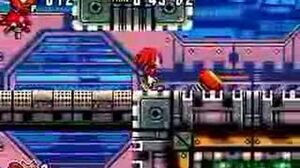 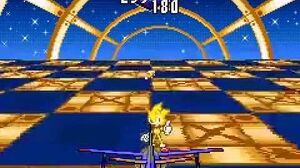