Null is a character in the Sonic the Hedgehog comic series and its spin-offs published by Archie Comics. It is an unknown creature originally meant to debut in Sonic Universe #96, but due to the issue's cancellation, it never appeared.

Null is an unknown creature colored purple with green eyes. Its forehead, chest, hands, and feet are colored white. It has a light purple muzzle, with its inner eyeball colored a darker purple. Null has immature spikes growing on its back.

In its minion form, Null splits into several, undetailed purple incarnations of itself.

Due to the cancellation of Sonic Universe' #96, the issue which debuted Null, pivotal information, such as names and dialogue, are unknown. However, page scans have given a taste of what was to come.

Null appeared in the Sol Zone and gave Blaze the Cat so much trouble that Marine the Raccoon had to call upon Bunnie D'Coolette via the Jeweled Scepter to help purge it. Null was successful in consuming a member of the Coconut Crew before he was met with heavy opposition when Bunnie arrived to help Blaze eliminate the mysterious creature. Null was successfully purged by Bunnie after being temporarily affected by Null.

Null can separate itself into lesser detailed, purple minions that can combine together to form its true state. Regardless of what form Null takes, it can absorb any lifeform to power itself. However, these forms can be defeated with fire. 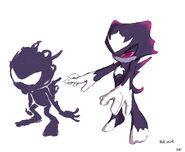 Concept artwork of Null and its minion form, by Adam Bryce Thomas.
Add a photo to this gallery
Retrieved from "https://sonic.fandom.com/wiki/Null?oldid=2238538"
Community content is available under CC-BY-SA unless otherwise noted.