The Nrrgal Warrior (ナーガル戦士, Nāgaru Senshi?) is an enemy that appears in Sonic Chronicles: The Dark Brotherhood. They are large slug-like slime creatures that are members of the N'rrgal species who lives on the N'rrgal Colony. They are essentially amalgamations of several of the lesser Nrrgal Drones.

In some cases when defeating a Nrrgal Warrior in battle, it will split into two fully healed Nrrgal Drones. This usually occurs when there are two free places on their side of the battle field.

The Nrrgal Warriors' basic attack involves them jumping at an opponent and enveloping the opponent in their own slime-composed bodies for a few moments, before retreating. This attack can not only damage the player, but can also fully restore the Nrrgal Warriors' own Health Points and has a chance of inflicting Curse on the target, given they land a successful hit. Their POW moves are Water Shield and Drain Life, which can inflict Weaken.

Due to the Nrrgal Warriors' ability to fully restore their own Health Points with one attack, they are one of the more infuriating enemies in the game. However, they have the lowest value for their armor stat, making them highly vulnerable to attacks. To best defeat a Nrrgal Warrior in battle, the player has to focus on targeting one Nrrgal Warrior at a time and defeating it, before moving on to the next or distract all of them so that they may miss their attacks.

As members of the N'rrgal race, the N'rrgal Warriors are energy eaters, meaning they can absorb energy from machines and the life force from their opponents, which serves as their main defense. This gives them a powerful regenerative capacity, allowing them to completely rejuvenate themselves with just one attack. They are also able to shoot slime from their bodies as projectiles.

The N'rrgal Warriors can reproduce asexually by splitting in two to form a pair of new worker drones, which makes them ideal frontline soldiers, or agglomerate together to produce even more fearsome opponents or higher beings, such as the N'rrgal Queen. 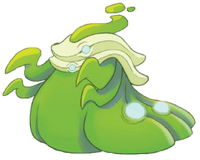 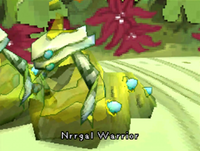