Nonaggression (ノンアグレッション, Non'aguresshon?) is the ninth and true final Zone in Sonic Advance 3, unlocked if Altar Emerald is cleared with Sonic the Hedgehog as the leader while all seven Chaos Emeralds are obtained. It features the final fight against Ultimate Gemerl, who is a powered-up form of the robot Gemerl.

Nonagression is set around in some unknown region of outer space which appears to constantly fade into blue and orange hues.

After Gemerl and Dr. Eggman were defeated by Sonic in their encounter, the presence of the Chaos Emeralds caused Gemerl to go haywire and charge at Sonic, causing him to drop the Emeralds. Gemerl then used their powers to transform into Ultimate Gemerl. Before leaving, he used one of his "arms" to grab Eggman and throw him into Sonic. When he recovered, Sonic then used the Chaos Emeralds to become Super Sonic and teamed up with Eggman to bring the out-of-control Gemerl down.

At the end of the fight, Sonic passed out in the following explosion, but woke up back home and found himself surrounded by his friends who had awaited his return. After seeing Eggman leaving, who is implied to have brought him to safety, Sonic headed out himself to search for new adventures. Meanwhile, Gemerl reverted back to his normal form and lands at a beach who was eventually found by Cream. She took the damaged robot to Tails who repairs Gemerl albeit with a more friendlier personality and Gemerl quickly became friends with Cream.

Similar to other true final zones/stages, the player assumes control of Super Sonic where the sole objective is to defeat the boss, while collecting Rings that constantly appear throughout the Zone to maintain Sonic's super transformation. The player starts with 50 Rings and their Ring count will slowly drain over time. Should the player's Ring count deplete to zero, the player will lose a life and will have to retry the zone from the beginning. Super Sonic can fly around in all directions and use the Super Sonic Boost to make quick movements to avoid the boss' attacks. In addition, the player must also make use of his Tag Action with Dr. Eggman to expose the boss' weak point in order to damage it. 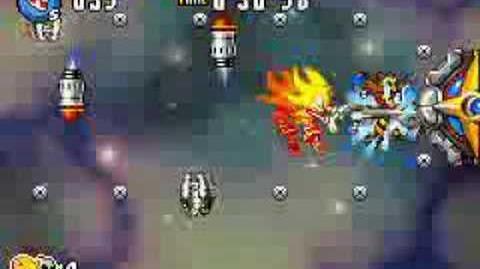