None (referred as male)

Who dares oppose Nominatus, viral sensation and destructor of worlds?!

Nominatus is a character that appears in the Sonic Boom series. He is a living computer virus[2] who plots to conquer the real world and destroy all its life forms.[1][3] Having exploited Dr. Eggman for the sake of his goal, he has become one of the doctor's nemeses. He is assisted in his schemes by Beta and Retro.

Nominatus is a demonic-looking humanoid with black skin, white eyes with red sclera, a red-glowing mouth, and red-glowing pattern-stripes around his arms, legs and waist. His features include two pointy ears, four horns protruding from his head, a grey arrow mark on his forehead surrounding a cyan triangle, and long red claws on his five fingers. For attire, he wears grey fringed cuffs, small high-heeled black boots with knee-pads, and a grey belt with a skull for buckle.

Sometimes, Nominatus wears a large cape that is red on the inside and grey on the outside. This cape has a grey collar and circuit-like lines on the outside around the upper half.

At some point, Nominatus got Beta and Retro as his minions. Together, the three of them would face a number of adversaries.[1]

Seeking the means to eradicate all life forms, Nominatus met Dr. Eggman, who had the resources he needed, on the internet. He befriended Eggman on the chat, a relationship that made Orbot and Cubot feel unwanted and leave temporarily, and he was soon allowed by Eggman to see his lair's schematics. Nominatus then secretly took control of Eggman's lair and robots. Though Orbot and Cubot tried to warn Eggman, Nominatus ousted the trio after announcing his agenda while launching an attack on Seaside Island with Eggman's robots. Nominatus was no sooner confronted by Orbot and Cubot, who had infiltrated cyberspace to stop him. While Nominatus was certain of victory, Orbot and Cubot's flawed method of deciding who to fight him made Nominatus short-circuit[4] from processing logical errors, thus liberating everything under his control.[3]

Having recovered from his defeat, Nominatus returned a year later. Trapped in cyberspace, he discovered Tails' Build-it Box while spying on Eggman. Using this device, Nominatus entered the real world with Beta and Retro to infect and conquer earth. However, the machine shrunk them when they emerged, so the trio had to take a dangerous trip to the machine's controls and rescale themselves. Nominatus then began using the Build-it Box to bring his army and weapons to the real world, only to come under attack by Team Sonic, Ms. Tomatopotamus, Eggman and the Badniks. Nominatus and his minions tried to escape as they stood to lose, but got shrunk by the Build-it Box and caught by Eggman, who trapped them and began keeping them as his pets in his lair.[1]

Nominatus is a malevolent, loud, and power-hungry artificial being. Deceitful and intelligent, he will gladly earn others' heartfelt trust, only to gleefully betray them without a pang of remorse.[3] He is also an antisocial boss who constantly criticizes his minions and never shows them any appreciation for their aid.[1] Nominatus values logic and order above all else and hates the real world for being illogical and messy, a sense of contempt that has compelled him to seek the destruction of the entire world and all its life forms.[3]

Nominatus is nearly fearless and very confident, if not a little cocky, as he eagerly invited Orbot and Cubot to fight him.[3] He is also extremely arrogant and prideful, and tends underestimate his opponents. Like Dr. Eggman, this attitude causes him to become far too overconfident and boastful for his own good, making him prone to announce his plans prematurely and instigate his own downfall. Regardless, Nominatus is very determined and not one to get deterred by setbacks, although such situations often frustrates him to no end. He is likewise a vengeful character who promises those who have crossed him swift and terrible retribution.[1]

In cyberspace, Nominatus will sometimes communicate using Smilies, which appear as low-bit speech bubbles around his face.[3]

As a virtual being, Nominatus' powers are manifested in the manipulation of cyberspace, giving him potential omnipotence within his native realm. From cyberspace, he can take control of virtually any computerized devices in the real world. Supposedly, he can even manipulate the virtual reality around him to create environments, traps, and give himself different powers (like a degree of pyrokinesis).[3]

In the real world, Nominatus does not appear to hold the same level of power he has in cyberspace, and he lacks his technopathic abilities. However, he is still a powerful being; accordingly, the combined strength of Sonic, Amy and Sticks was nowhere near enough to defeat him. One ability he has demonstrated in the real world is a form of electrical telekinesis which lets him move targets by firing energy from his hands. He can also use this ability to charge objects with electricity and form walls of energy.[1]

Being so logically orientated, Nominatus is incapable of understanding and processing illogical concepts. Trying to process too many logical errors at once will ultimately cause him to short-circuit.[3]

Dr. Eggman is Nominatus' sworn enemy. When they first met, Nominatus used the doctor to achieve his ambitions by pretending to befriend him and manipulating him into giving him his secrets. Once Nominatus revealed his ruse to Eggman, he gleefully left the doctor hurt and emotionally vulnerable.[3] Since then, Nominatus has become one of Eggman's nemeses and rival for the position as the dominant supervillain on Seaside Island. Currently, he begrudgingly lives as Eggman's prisoner following their latest battle.[1]

Beta and Retro are Nominatus' personal virus minions. While the two of them serve Nominatus faithfully and assist him without asking him for anything in return, Nominatus treats them poorly by criticizing them on a regular basis, chiding them for being dimwits, and rejecting any notion of comradery between them.[1]

"Your underlings are correct! You should never have trusted me! Now I've taken complete control of your lair!"
—Nominatus revealing his deceit, "Let's Play Musical Friends"

"Your world is so illogical, so messy. I'm eliminating all life forms, and I am using your tech to do it!"
—Nominatus voicing his ambitions, "Let's Play Musical Friends"

"You can't use Thursday! It's not an object!"
—Nominatus validating Orbot and Cubot's game of "Rock, donut, Thursday", "Let's Play Musical Friends"

"You non-digital lifeforms are powerless against me!"
—Nominatus holding Sonic, Amy and Sticks in his grip, "Nominatus Rising"

"I'll be back! And my vengeance will be swift and terrible!"
—Nominatus promising retribution, "Nominatus Rising" 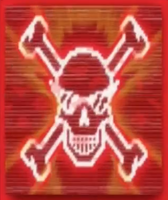