The Nocturne Equites (ノクターン族 きし, Nokutān-zoku kishi?) is an enemy that appears in Sonic Chronicles: The Dark Brotherhood. They are a unit of echidna soldiers from the Nocturnus Clan who were banished to the Twilight Cage.

The Nocturne Equites' armor is equipped with a pair of wings on the back that allows them to fly and launch assaults from above.

The Nocturne Equites can be encountered on the Kron Colony, Zoah Colony and N'rrgal Colony, where they will appear on each colony after obtaining the respective Chaos Emerald in those locations. Their basic attack is flying towards their opponents and slashing them vertically with their Nocturne Blade. This attack cannot only damage the player, but also replenish the Nocturne Equites' own Health Points by leeching off the opponent's Health Points, given they land a successful hit. Their POW moves are Phase and Stasis Grenade, which inflicts Stun. 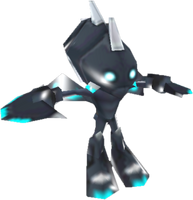 A Nocturne Equites in gameplay of Sonic Chronicles: The Dark Brotherhood.