Nite the Owl, from Sonic the Hedgehog 30th Anniversary Special.

Nite the Owl[1] is a character that appears in the Sonic the Hedgehog comic series and its spin-offs published by IDW Publishing. He is an anthropomorphic owl and Nite the Owl's counterpart from another dimension set in the recent past, where he works as the radio host for K-TBR 199.2.

Nite is a light brown and cream feathered rotund, anthropomorphic owl. He also has black eyes with yellow sclera and a short orange beak. For attire, he wears red rimmed glasses, a red, orange and yellow striped scarf, and black and gray headphones.

On a seemingly normal morning, Nite began his shift on K-TBR 199.2 with the morning parliament, followed by a traffic update featuring problems caused by Sonic. Not long after, Nite promised the listeners that the station would soon go live with their coverage of Mr. Munch-Um's road rally. However, he would soon announce that the road rally had been postponed due to an attack on the city by Dr. Eggman. Afterward Nite reported that he would play the Chao Chaos's latest hit, "Chili Dog Rhapsody".[1]

Nite is an optimistic individual who carries out his work at the K-TBR 199.2 radio station with professionalism and good spirits.[1] 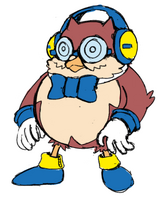 Scrapped redesign made by Mauro Fonseca. 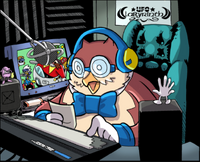 Alternate version of his debut panel with said redesign.