The GameCube, officially called as the Nintendo GameCube and often abbreviated as GC or GCN, is a video game console system developed by Nintendo, for which several Sonic the Hedgehog games were released. The GameCube was the successor to the aging, cartridge-based Nintendo 64 game console and the predecessor to the Wii.

The GameCube competed for sales in the sixth generation of video game consoles alongside the Dreamcast (which ceased production before this system's launch), the PlayStation 2, and the Xbox.

The GameCube was the first Nintendo system to use optical discs as a primary storage medium for its games. The discs are similar to the miniDVD disc format; as a result of their smaller size and the console's small disc compartment, the system was not designed to play standard DVDs or VCDs. 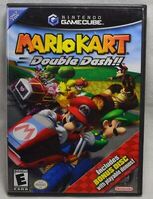