A crowded city at nighttime.

Night Chase (ナイトチェイス, Naitocheisu?) is the first course in the Babylon Rogues Story Mode in Sonic Riders. It precedes Red Canyon. It is only playable as Jet the Hawk in the story mode, but in a normal race, any character can be chosen.

Babylon Story begins aboard the Rogues' airship. Jet is sitting at his desk, looking at a strange cube (which in Heroes story, he uses to raise up Babylon Garden) when Storm suddenly bursts in. He and Wave notice the cube and ask if it really is the key to Babylon Garden and imagine what kind of treasure lies within. Wave tries to examine the cube, but Storm doesn't let her have it, and the two proceed to fight each other. Jet quickly breaks up the fight and asks why Storm barged in to his room. He mentions that Eggman had a proposition for him. At this point, Eggman enters and asks if they have the key to Babylon Garden. Jet tries to deny it, but Eggman is not fooled. He tells Jet if he wants to find Babylon Garden, he must get the seven Chaos Emeralds.

This stage is shown to be the gameplay directly after the opening story cutscene. Jet evades the police and Team Sonic. This is not an EX World Grand Prix race.

The course takes place at nighttime, filled with many police cars in the city. The city is also a course at daytime, called Metal City, and is for the Hero Story Mode. The city is also called 'Future City' in the opening scene in Hero Story Mode. Police cars make this course tricky because they are obstacles that can slow you down and need to be avoided (unless you are a power type character and can smash right through them). In many ways, this course is much harder (especially in story mode) than its original track, Metal City. The music in this stage is the same as in Metal City. 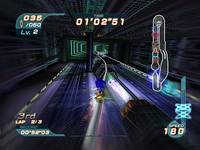